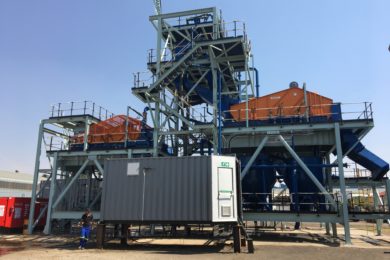 Now celebrating its centenary year, IM Editorial Director Paul Moore spoke to SGS Bateman, the current incarnation of the famous Bateman name in mineral processing technology, which continues to be a leading player in Africa and worldwide in bespoke plants including dense media separation

With multiple mining technology and mineral processing specialist acquisitions in recent years, it is easy to understand why SGS Bateman became famous in the first place, and why it continues to be a global leader in the markets it serves. Bateman, now SGS Bateman (Pty) Ltd, is a great example of longevity in the engineering sector. The company’s heritage is based on Bateman Engineering, which was founded in 1921 in South Africa and rapidly expanded globally, specialising in mineral processing plant design and delivery across diamonds, gold and a range of other commodities. 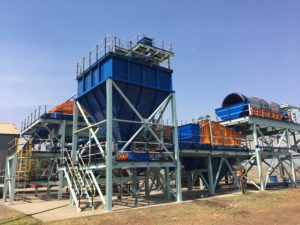 The group also included solid-liquid separation company Bateman Delkor in Australia. In 2012, BSGR sold all the assets to Italy’s Tenova. The EPCM and modular plant part of the company, Bateman Projects, was sold to SGS in 2015; while Bateman Advanced Technologies became Tenova Advanced Technologies (TAT), and Delkor eventually becoming a brand under TAKRAF Group, the mining-focused part of Tenova.

In mining, one of SGS Bateman’s core strengths has been the design, fabrication and supply of complete mineral processing plants, with a specialisation in dense media separation (DMS) modular plants. To provide a basic description, diamonds are heavier than kimberlite gangue minerals and require specific processing.

Primary kimberlite or marine or alluvial diamond ore, is crushed and screened, then water and dense media (most commonly ferrosilicon) is added with the media forming a very specific pulp density.  Hydrocyclones then recover the diamonds as sinks. The process of DMS has been around for well over 100 years. Where SGS Bateman provides value is in delivering the most efficient plant process possible using the right combination of screens, cyclones and media, adapting and customising the process to different types of ores, including diamond bearing ores, and scaling the process to customer needs.

The modular DMS business dates to the 1950s, developed by another South African contracting company, Fraser and Chalmers. Large numbers of plants, processing up to 30 t/h, were sold to the diamond sector and other operations up to the late 1960s when Van Eck and Lurie, another local company, took up the reins. When Bateman acquired Van Eck and Lurie, the DMS business became a strategic business unit, giving it important significance in the company.

There are several advantages to modular designs. Most importantly, modules are fully assembled and tested before they are shipped to the customer, where they are then built on site. Their compact nature also means they can be incorporated easily into larger processing plants. Finally, the modules are standalone, meaning they can be moved to new operations or sold on to new owners. Modularisation has since gone on to be adopted in many other areas of mineral processing but DMS was one of the pioneers, built out of a requirement specifically for remote sites that require top performance.

The ownership transitions from BSGR to Tenova to SGS have not affected Bateman’s capacity to supply DMS plants – traditionally to the diamond industry but also now in new markets including critical materials like lithium. SGS Bateman remains a global leader in DMS for diamond processing and continues to supply solutions to global majors like Alrosa and De Beers (including Debswana and Namdeb) and other companies like Petra Diamonds which acquired several large De Beers mining assets. Other groups such as Lucara in Botswana and MIBA in DRC are also clients. These plants have included everything from small modular plants running 5-10 t/h right up to megamodules handling over 200 t/h.

Most new diamond plants or expansions of existing diamond plants include SGS Bateman DMS technology in some form. Simon Moses, Business Development & Process Manager, told IM: “When Bateman first started in DMS modular plants, it was mainly in diamonds and that’s where we got our name. It is now a widely used technology in coal as a gravity separator competing with other dense media solutions notably the Larcodems. In recent years what we have found that DMS is being used more in various commodities such as iron ore, base metals like copper, precious metals like platinum, and also industrial metals like lithium.” 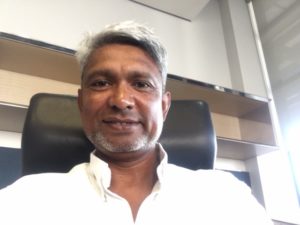 Iron ore technology development has included ultra-high dense medium separation (UHDMS) technology supplied to Kumba Iron Ore and others. Copper projects have included operations in the DRC treating copper oxide ore. In battery metals and specifically hard rock lithium, Moses says that DMS is now the favoured method for dealing with coarser material, with finer material utilising flotation. The main and evolving producers are trying to avoid flotation where they can to reduce reagent use and lower costs of flotation equipment and power demand that come with fine comminution and running the float plants. “Most of them are trying to get to 6% lithium oxide concentrate with recovery of 70%+ with DMS then stockpiling the fines and middlings from DMS for grinding and floating at a later date.”

SGS Bateman has supplied DMS plants to lithium projects in Australia. In one example SGS Bateman supplied a 50 t/h modular DMS plant to a lithium producer in 2012 before being selected again in 2019 by the same client to supply a 100 t/h modular DMS plant. The bespoke design beneficiates spodumene ore to produce a lithium concentrate with the plant fully trialled in South Africa before being packed into containers and shipped to site where it is now operating successfully. 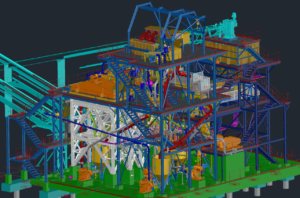 Is ore sorting reducing the demand for DMS plants? Moses says that in fact it is just changing how DMS is being applied. Ore sorting is certainly seeing high demand in areas with water shortages. “If your process permits you to go dry then sorting plays an important role but generally it will not necessarily permit you to make saleable grades. We see now sorting being used as a preconcentration step in conjunction with DMS to reduce throughput.”

In less arid areas, DMS itself is being used as a preconcentrator. “We have had clients approach us to preconcentrate using DMS before milling. This is being done a lot in the platinum mines especially for UG2 reef material where you upgrade by getting rid of gangue silicates before milling. By using DMS to preconcentration, the result is a reduction in milling costs.” A lot of this activity has been brownfield related where the mine wants to increase capacity underground and increase ROM by placing a DMS between the ROM stockpile and the mill, thus increasing throughput without requiring to upsize the main concentrator plant.

The market still involves a lot of bespoke design, which is where SGS Bateman says it comes into its own. “The DMS is dictated by the ore. If it is diamonds, we have standard DMS designs for that for all capacities from 5 t/h up to 150 t/h or more. When you change to base metals, there are a lot of changes as it is very specific to the project and deposit. The design depends on the desired yields, screen sizes etc, different cyclones. Each of the DMS suppliers has its own preferential design in terms of feed and separation method, spillage management, control systems, instrumentation etc but the core DMS process is still the same.”

So why has SGS Bateman retained its position in the DMS market? “Bateman has been around for 100 years. A lot of clients know the brand from our years of project successes and actually associate the modular DMS plant with the Bateman name.”

It is important to reiterate that SGS Bateman does a lot more than just DMS – it builds full concentrators, hydrometallurgy plants, and metal refineries for base metals, coal, iron ore, gold, chrome and platinum, amongst others. SGS Bateman also does a lot of EPCM work while supplying modular plant solutions to other EPCM companies where it is appreciated for its specialist experience.

What’s in it for SGS?

All this said, what synergies are there between Bateman and SGS? Ken Richardson, SGS Bateman Sales Manager: “SGS in the early 2010s was growing fast in its core analytics, assay and verification business. In Africa and globally they have a very strong presence operating onsite labs at mines. At the time there were some other smaller companies competing in the metallurgical testwork space who also offered process plant design work and plant upgrades. SGS acquired two of them – Time Mining Group in Johannesburg plus KD Engineering/METCON, in 2013. Those two companies became a steppingstone in their decision to buy Bateman and to grow the minerals business into the process plant engineering and design services.”

SGS Bateman still operates independently at arm’s length within SGS as both have their own customer bases and market niches. For example, SGS Bateman sometimes uses SGS labs for ore testwork to back up process guarantees but will also use other labs when appropriate. Having Bateman within the newly created Natural Resources group gives SGS the ability to offer a full suite of services should the customer want to work with SGS beyond initial project scoping studies to full feasibility and project delivery.