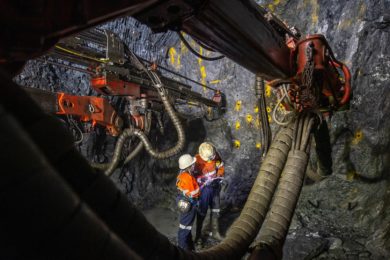 AngloGold Ashanti, in line with its strategy to ensure a sustainable contribution to the economies in host countries, has facilitated the establishment of the BG Umoja joint venture in Tanzania, which has been awarded a $186 million two-year mining contract for the Nyankanga and Geita Hill underground mining projects. The 80/20 joint venture is a partnership between Africa Underground Mining Services (AUMS) Tanzania, a subsidiary of Australia’s Perenti Group, and local drilling services and mining-supply company, Geofields Tanzania Ltd.

The partnership is modelled on a similar underground mining joint venture at the company’s Obuasi Redevelopment Project in Ghana between AUMS Ghana and Accra-based, wholly Ghanaian-owned Rocksure and will help build local specialised mining capacity.

“We’re working with our experienced mining contractors to assist in establishing local joint ventures for long-term transfer of sustainable skills, and to continue building on our sustainable local procurement programmes,” said Sicelo Ntuli, AngloGold Ashanti’s Chief Operating Officer: Africa. “AngloGold Ashanti is building sustainable local procurement programmes that will allow it to stimulate economic and social development at all of its operations, evidenced by the significant contribution Geita has made to the fiscus and people of Tanzania.”

AngloGold Ashanti’s annual expenditure with indigenous Tanzanian suppliers has almost tripled to $162 million since 2016. The company’s local team in Tanzania has set itself an ambitious target of 60% to 70% of all expenditures with indigenous Tanzanian companies, by 2025. In addition, AngloGold Ashanti’s Geita Gold Mine has awarded a two-year fuel transportation contract, worth approximately $10.8 million a year, to two local contractors – one of which is originally from Geita. This is in line with the mine’s commitment to contribute to the economies of host communities. The Geita-based company was part of Geita Mine’s supply chain capacity building initiative for host community suppliers, a partnership between the mine and the National Economic Empowerment Council.

To influence Scope 3 emissions, trucks are to be compliant with EURO IV emissions standards, tankers are to be made of an aluminium alloy material to reduce weight and the age of the fleet will be maintained at less than six years.The contractors already employ female fuel tanker drivers, fulfilling the mine’s requirements for diversity and inclusion. The two contractors both own workshop facilities in Geita town and participate in social initiatives aimed at uplifting the lives of host community residents.

AngloGold Ashanti has been operating at Geita Gold Mine for more than 20 years, with the project initially a single pit mine, evolving now to a predominantly underground operation, employing 5,700 employees and contractors. Earlier this year, the Government of Tanzania recognised AngloGold Ashanti’s contribution to the economy of the country, awarding it for its outstanding performance in a number of areas, including environmental and safety performance, corporate social investment, the best taxpayer in the mining sector, the runners up in local business content and overall best performer in the mining sector in Tanzania in 2019/2020.