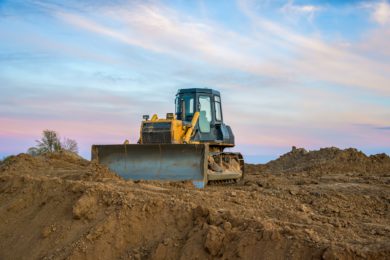 Mine-site rehabilitation generally includes a significant earthworks component, the scale of which may include considerable resources (assets and personnel) at substantial cost to the mining company, and at a time when the costs are not off-set by the extraction of ore.  This highlights the importance of using the most cost-effective methods available for the rehabilitation process. And as the mining autonomy focus moves beyond just primary machines to ancillary, it represents a significant potential market in the form of auto dozing.

Australia’s Auto-mate told IM that it sees the automation of rehabilitation dozers as providing an opportunity to reassess the way in which dozing has been performed in the past, with significant safety and efficiency advantages to be gained. Cameron Smart of Cammel Consulting also suggested to Auto-mate that the general consensus of economical push distance for dozers of no more than 200 m is no longer valid as the general parameters when doing rehabilitation differ to general operations – pushing is downhill and in some cases over edges and into voids versus uphill pushes and excavation management in a general mining environment.

His experience has shown that in certain operations, dozer push is the most effective method for material movement out to a distance of almost 500 m – when compared to scraper and truck/shovel operations. This efficiency is primarily due to the ability of a dozer to win material, push it in a straight line and place it in its final location without the need for additional ancillary equipment or the establishment of extra infrastructure (such as haul roads).  When “slot” pushing downhill at grades in excess of 10%, a dozer has the advantage of both gravity and straight-line haul over alternative equipment. Where a dozer can push 400 m downhill, at say 20%, and directly into a void 50 m or more deep, rubber tyred equipment may have to travel well over 2 km (one-way) to achieve the same movement – and then still require ancillary equipment to do final placement at the dump point.

Auto-mate states: “By taking advantage of the increased viable range of a dozer push, mines can achieve a lower operational cost for their rehabilitation efforts when done effectively. The down-side with these increased distances of push and reverse, is a degree of monotony and an increased risk of driver fatigue – a concerning safety issue and an ideal scenario for the application of an autonomous solution. In addition to this, there are hazards associated with geotechnical failures such as a failure at the edge of a pushing face, mud dumps, engulfment, falling off a highwall or even water, that all pose risks to the safety of the dozer and operator.”

Small movements that are precursors to geotechnical failures are often difficult for an operator to identify, often impossible, in poorly lit or night-time operations. With the advanced sensory array fitted to autonomous machines, a live representation of the operational face is now available that can monitor for these events and provide “real time” or early warning to avoid possibly catastrophic results. In addition, an autonomous dozer provides the ultimate risk mitigation as the need for an on-board operator has been eliminated resulting in a safer and more efficient rehabilitation solution.

Similarly, after a number of years of operation, until the end of the mine life or mine closure, the dozers which have been used throughout the operation would have completed a high number of working hours. “At this stage, it would perhaps be uneconomical to relocate these assets to other operations. To date there has not been a viable option for the ‘retrofitting’ of an autonomous system to these machines, now however, these aged assets can be automated and used for on-site rehabilitation dozing. With the inclusion of an interoperable and flexible autonomous solution retrofitted to the aged asset, many valuable and necessary rehabilitation tasks can be completed more safely, efficiently and cost effectively. The benefits here include making the most of current, ageing assets, and avoiding the cost of relocation and recommissioning at an alternative site.”

Automation provides the opportunity for these assets to be utilised to their full capacity, without requiring the numbers of operators required for manual operation. Whether the rehabilitation is performed by the mine or a contractor, there are cost benefits inherent in requiring a smaller team on-site. “The current challenges faced by the industry in the recruitment of drivers presents another layer of complexity to the rehabilitation process, with high wages expected as demand increases. A solution that requires minimal drivers will go a long way to ensuring the timely completion of the project in an efficient and cost-effective way.”

Smart commented: “Rehab dozing by nature is both repetitive and repeatable. I cannot think of a more ideal application for automation, with immediate results.” Automated dozers can operate simultaneously on the same area, controlled by a single operator in a remote and safe location. With the Auto-mate Rehabilitation Dozer solution, as the ‘brain’ is located on the dozer, any unanticipated rocks or hazards can be identified and avoided, without damage to the asset or unnecessary delays through stoppages or downtime. Operation can continue 24/7 to ensure faster rehabilitation of the site and full completion of the mine project.

Going forward, the government will be under pressure to include best practice updates to the current regulatory framework for mine rehabilitation which will require proper consideration of rehabilitation as part of the mine plan. Auto-mate argues that autonomous technologies will be integral in ensuring the earthworks for the planned rehabilitation are safe, cost effective and completed to requirement.