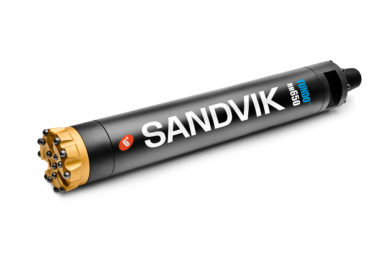 Sandvik Mining and Rock Solutions is introducing a new down-the-hole (DTH) hammer, among many new innovations, at MINExpo 2021 in Las Vegas, this week.

The company says it is launching several new rock tools at MINExpo, with its new Tundo™ RH650 DTH hammer one of the highlights. This DTH hammer can, the company says, reduce fuel consumption by up to 15% while increasing penetration rates by up to 20%.

Sandvik is also introducing its heavy duty top hammer drill bits, the new Autobit and its Charger™ RR450 rotary drill bit, which can achieve up to a 90% increase in bit life compared with other premium sealed bearing bits, according to the company.

Battery-driven equipment to enable emission-free underground mining and help customers improve sustainability and profitability is also on show at the Sandvik booth.

The company has unveiled the Sandvik TH550B, its latest 50 t battery-electric truck, and plans to virtually introduce the Toro™ LH514BE, an AutoMine-compatible cable-electric loader, boosted with cutting-edge battery technology.

The company is also showcasing the Sandvik LH518B – the industry’s largest battery-electric loader – and launching the Sandvik DS412iE, its first battery-powered rock bolter that rounds out the company’s first full zero-emissions offering for all underground drilling applications.