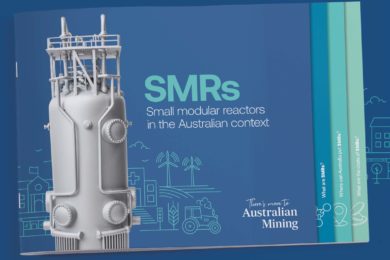 A Minerals Council of Australia-backed report looking into the potential use of small modular reactors (SMRs) in Australia argues they might provide realistic options for decarbonising large regional settlements and off-grid mining operations.

The report, titled ‘Small modular reactors in the Australian context’, is authored by Dr Ben Heard, a Senior Consultant in the Engineering and Asset Management team of Frazer-Nash Consultancy.

Dr Heard thinks SMRs have a role to play in replacing fossil fuel capacity in Australia’s existing grids, but also offer a decarbonised power alternative at off-grid mine sites.

SMRs are power generators of typically 300 MWe or less that use nuclear fission to provide clean, fully reliable heat and power, on-grid or off-grid. The construction time and capital costs associated with them are considerably less than large-scale nuclear reactors or equivalent energy production methods, according to the report. They are also among the safest forms of energy production, coming with passing cooling systems, fewer mechanical parts requiring maintenance and auto fail safe, Dr Heard said.

“Factory-built and easily transportable, SMRs can be scaled to meet energy demand,” Dr Heard said. “Increasing capacity is as simple as adding another module.”

Some SMRs will also use fuel more efficiently than current reactors, producing less waste, according to Dr Heard, who said “advanced fuels” will be easier to recycle for even greater energy production.

On SMRs potential in mining, Dr Heard said: “Being potentially water free and offering decades of uninterrupted power, some of the earliest and most logical deployments of nuclear power in Australia might actually be away from our major transmission networks. Where operations are more speculative, hybrid power systems of diesel fuel, solar and batteries are likely to remain solutions of choice.

“However, for establishing or repowering remote operations away from fossil fuel consumption and with exceptional reliability, the ability to bring megawatt decades of reliable power all the way to where it is needed is a potentially game-changing technology solution.”

An overseas example of this comes from KGHM, the Poland-based copper and silver miner, which recently signed a joint commitment with NuScale Power and PBE Molecule to develop and implement SMR technology to replace its existing coal-based energy sources.

Dr Heard concluded: “In summary, SMR technology has several potentially sensible uses in Australia’s energy transition that are worthy of close consideration – joining renewable technologies to provide an incremental transition from retiring coal and gas assets; as an option for large, established settlements, and for smaller and remote off-grid settlements and operations.

“On a technical basis, their placement is relatively unconstrained compared with alternative generating options and potentially advantageous in taking advantage of existing infrastructure and skilled workforces.

“Assuming a future legislative and regulatory environment that permits the use of this technology, actual siting will benefit from best practice, consent-based siting processes.”