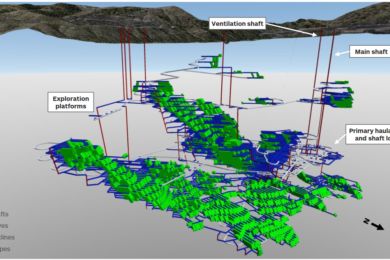 South32 Ltd has provided an update following completion of a pre-feasibility study (PFS) for the Taylor Deposit, which is the first development option at its 100% owned Hermosa project located in Arizona, USA. The PFS results support Taylor’s potential to be the first development of a multi-decade operation, establishing Hermosa as a globally significant producer of metals critical to a low carbon future, delivering attractive returns over multiple stages. An initial development case demonstrates a sustainable, highly productive zinc-lead-silver underground mine and conventional process plant, in the first quartile of the industry cost curve.

Hermosa is a polymetallic development option located in Santa Cruz County, Arizona, and is 100% owned by South32. It comprises the zinc-lead-silver Taylor sulphide deposit (Taylor Deposit), the zinc-manganese-silver Clark oxide deposit (Clark Deposit) and an extensive, highly prospective land package with the potential for further polymetallic and copper mineralisation. Hermosa is well located with excellent access to skilled people, services and transport logistics. South32 has completed a PFS for the Taylor Deposit, its first development option at Hermosa. The Taylor Deposit is a large, carbonate replacement massive sulphide deposit which extends to a depth of approximately 1,200 m over an approximate strike length of 2,500 m and width of 1,900 m. The Mineral Resource estimate for the Taylor Deposit is 138 Mt, averaging 3.82% zinc, 4.25% lead and 81 g/t silver. The deposit remains open at depth and laterally, offering further exploration potential.

The PFS design for Taylor is a dual shaft mine which prioritises early access to higher grade mineralisation, supporting zinc equivalent average grades of approximately 12% in the first five years of the mine plan. The proposed mining method, longhole open stoping is similar to that used at Cannington and maximises productivity and enables a single stage ramp-up to the miner’s preferred development scenario of up to 4.3Mt/y. In the PFS schedule, shaft development is expected to commence in FY24 with first production targeted in FY27 and nameplate production in FY30. Ore is expected to be mined in an optimised sequence concurrently across four independent mining areas, crushed underground and hoisted to the surface for processing. The mine design contemplates two shaft stations, one for logistics and access, and the other for material handling. The primary haulage material handling level is expected to be located at a depth of approximately 800 m.

The operation would be largely resourced with a local owner-operator workforce, with a mining fleet consisting of jumbo drills, rock bolters, production drills, load, haul and dump machines and haulage trucks. Taylor’s feasibility study will evaluate the potential use of battery electric underground equipment and trucks within the mining fleet, bringing further efficiency benefits, reducing diesel consumption and carbon emissions. South32 states: “We are testing technology solutions to support this, with a trial of electric vehicles planned at our Cannington zinc-lead-silver mine during FY22 and our ongoing participation in the Electric Mine Consortium.”

The PFS process plant design is based on a sulphide ore flotation circuit to produce separate zinc and lead concentrates, with silver by-product credits. The flowsheet adheres to conventional principles with a primary crusher, crushed ore bins, comminution circuit, sequential flotation circuit, thickening and filtration. Tailings are processed by either filtration and drystacking, or by converting to paste and returning them underground. Approximately half of the planned tailings will be sent underground as paste fill, reducing the surface environmental footprint.

Pre-flotation and pre-float concentrate cleaning steps have been included in the plant design to prevent magnesium oxide and talc from affecting flotation performance and concentrate quality. Jameson cell technology is proposed to be used in place of some traditional mechanical flotation cells to enhance recoveries. Once filtered, concentrate would be loaded directly into specialised bulk containers. The PFS processing facility has design recoveries of 90% for zinc and 91% for lead, and target concentrate grades of 53% for zinc and 70% for lead. Silver primarily reports to the lead concentrate, with a design recovery of 81%. The zinc concentrate is considered mid-grade with relatively high silver content for zinc, and the lead concentrate is considered high-grade.

The Taylor Deposit will now progress to a feasibility study, including work streams designed to unlock additional value by optimising operating and capital costs, extending the life of the resource and further assessing options identified to target a carbon neutral operation. Completion of the feasibility study and a final investment decision to construct Taylor are expected in mid CY23. Separately, a scoping study for the spatially linked Clark Deposit has confirmed the potential for a separate, integrated underground mining operation producing battery-grade manganese, as well as zinc and silver. Clark has the potential to underpin a second development stage at Hermosa, with future studies to consider the opportunity to integrate its development with Taylor, potentially unlocking further operating and capital efficiencies.

“While exploration drilling to date has been focused on the Taylor and Clark Deposits, we have continued to complete surface geophysics, soil sampling and other exploration programs across our land package. This work has resulted in the definition of a highly prospective corridor including Taylor and Clark as well as the Peake and Flux exploration targets which will be prioritised for drill testing in CY22.” South32 Chief Executive Officer, Graham Kerr said: “The Taylor Deposit provides an important first development option for our Hermosa project in Arizona, USA. The project has the potential to sustainably produce the metals critical for a low carbon future across multiple decades from different deposits.“

He adds: “Completing the pre-feasibility study for the Taylor Deposit is an important milestone that demonstrates its potential to be a globally-significant and sustainable producer of base and precious metals in the industry’s first cost quartile. Beyond Taylor, Clark offers the potential to realise further value from our investment in Hermosa through the production of battery-grade manganese, a mineral designated as critical in the United States. Additional exploration targets around Taylor and Clark are indicative of further upside while the broader land package contains highly prospective areas for polymetallic and copper mineralisation. We are designing the Taylor Deposit to be our first ‘next generation mine’, using automation and technology to minimise our impact on the environment and to target a carbon neutral operation in line with our goal of achieving net zero operational carbon emissions by 2050. The future development of Taylor provides a platform from which to realise Hermosa’s immense potential. It will further strengthen our portfolio and align with the already substantial growth in production of metals critical to a low carbon future that we have embedded in the portfolio over the past six months.”