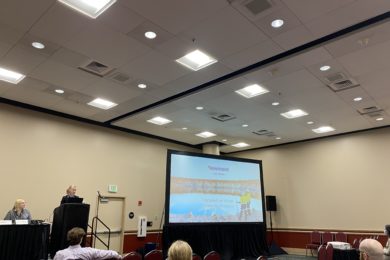 Partnerships between miners and mining equipment, technology and service (METS) providers will prove key in solving the emissions reductions and sustainability targets mining companies have set for 2030 and beyond, Victoria Gosteva, Decarbonisation Program Manager at Newmont, said at the SME MineXchange Annual Conference & Expo in Salt Lake City today.

While outlining Newmont’s Energy & Decarbonization Program on stage, Gosteva made important statements about how the wider industry could decarbonise its operations and hit the goals it has set. Newmont, itself, has set a goal of reducing its greenhouse gas (GHG) emissions by more than 30% by 2030, with an ultimate goal of being net zero carbon by 2050.

Gosteva, urging actions over the near term, said partnerships with the METS community would be needed to set the companies on the right track to hit their sustainability goals, explaining that it was not only the technology-readiness element that needed to be addressed, but also the required infrastructure to, for example, charge electric vehicles.

“We can no longer afford to be fast followers as an industry,” she said. “There is really not that much time left to reach the 2030 targets.”

She said the investment community was also taking note of the need to decarbonise mine sites, with emissions likely to become a big contributor of company valuation metrics in the future.

Focusing on Newmont’s journey, in particular, she highlighted the $500 million the company committed over five years toward climate change initiatives back in 2020.

In addition to a number of PPA agreements looking to decarbonise the power grid of many of its remote mines, she also highlighted the 2021 signing of a strategic alliance with Caterpillar Inc to deliver a fully connected, automated, zero carbon emitting, end-to-end mining system, as well as a number of “energy efficiency” type of projects related to automation, data analytics and other projects that came under these initiatives.

One project that has been helped by this is the strategic alliance with Caterpillar that will see the introduction of first-of-a-kind battery-electric haulage technology and automation at the gold miner’s Cripple Creek and Victor (CC&V) and Tanami mines in the USA and Australia, respectively.

Under the agreement, Newmont plans to provide a preliminary investment of $100 million as the companies set initial automation and electrification goals for surface and underground mining infrastructures and haulage fleets at Newmont’s CC&V mine in Colorado, USA, and Tanami mine in Northern Territory, Australia. The goals include:

Gosteva highlighted that this project – which would also see the companies work on re-using batteries for energy storage when they hit their end of life in mobile mining applications – was very important to the company achieving its goals, but acknowledged that there was no silver bullet to achieving its targets.