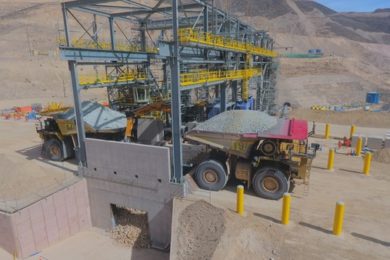 Anglo American has unloaded the first ore to the primary crusher at the Quellaveco copper project in Peru, marking a crucial milestone in commissioning tests prior to the start of operations.

Autonomous truck No. 19 – a Caterpillar 794 AC whose hopper sports the colours of diversity – was chosen to unload the ore at the $5.5 billion operation.

The ore entered Line 1 of the primary crusher where it was reduced to a size of 6.5 in (165.1 mm). Subsequently, it was taken from the mine area through a system of conveyor belts that extend more than 6 km to the coarse ore stockpile in the Papujune concentrator plant. Here, some 30,000 t of crushed ore was deposited. From there, it moved to the grinding area, where commissioning tests for the Line 1 SAG and ball mill began.

Tom McCulley, former CEO of Anglo American in Peru, was present at this important milestone for the upcoming start of operations. “Today, Quellaveco reached its most significant milestone with the shipment of the first ore to the processing plant. I want to thank all the 30,000 Peruvians who were with us during the construction stage.”

The commissioning tests are designed to ensure the optimal operation of the equipment and to verify the proper transfer of the ore from the time it is extracted in the pit to the processing plant, where the copper concentrate will soon be produced.

Quellaveco is in the Moquegua region and, at full capacity, will process 127,500 t/d of material. It will, Anglo American says, be the first 100% digital mine in the country, introducing new technology and processes to the national mining industry, such as autonomous mine haulage, that will improve performance in safety, production and sustainability.