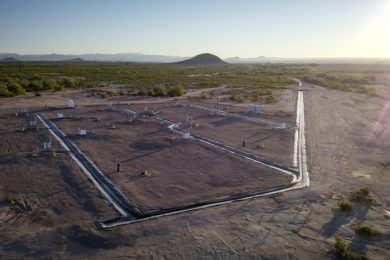 Taseko Mines Ltd has announced that the US Environmental Protection Agency (EPA) has publicly issued a draft Underground Injection Control (UIC) permit for its Florence Copper Project which will use in-situ (ISR) recovery. The EPA has stated that the public comment period for the draft federal permit will last 45 days, ending on September 29, with a virtual public hearing to be held on September 15.

Stuart McDonald, Taseko’s President and CEO, commented: “The UIC permit is the final key permit required for the construction and operation of the Florence Copper commercial facility. Our project has gone through extensive scrutiny by both the Arizona Department of Environmental Quality and the EPA over the past eight years and we are confident that the rigorous work completed by both these regulatory bodies will result in permitting success in the coming months.”

Taseko Mines says Florence Copper is expected to have the lowest energy and greenhouse gas-intensity (GHG) of any copper producer in North America, and will reduce the United States’ reliance on foreign producers for a metal considered to be critical for the transition to a low-carbon economy. “As the United States advances toward its goal of net-zero carbon emissions by 2050 – including 100% clean electricity by 2035 and 50% light-duty electrical vehicle sales by 2030 – the country will need to address its reliance on imports of critical metals. Low impact, environmentally sound projects like Florence Copper will help meet the growing US demand for copper,” concluded McDonald.

The planned ISR facility consists of an array of injection and recovery wells that will be used to inject a weak acid solution (raffinate – 99.5% water, 0.5% acid) into copper oxide ore and recover the copper-laden solution (pregnant leach solution, or PLS) in a five-spot well pattern for processing into pure copper cathode sheets. The mine design is based on the use of five-spot well patterns, with each pattern consisting of four extraction wells in a 100 ft grid plus a central injection well. The flow is balanced so that the extraction exceeds the injection rate and thus the hydraulic surface slopes towards the ISR wells and solutions are maintained in the leaching area. The wells are lined to isolate ore zones for extraction and are sealed and tested for mechanical integrity. Well drilling will continue through the project life and will be done by contractors.

Since acquiring Florence Copper in November 2014, Taseko has advanced the Project through the permitting, construction, and operating phase of the Phase 1 Production Test Facility (PTF). The PTF, a $25 million test facility, was designed to prove the integrity of the in-situ copper recovery process and provide Taseko with important technical information. The 24 well facility and the SX/EW plant commenced operations in December 2018. Over the course of 18 months, Taseko evaluated the operational data, confirmed project economics, and demonstrated the ability to produce high-quality copper cathode with stringent environmental guidelines.