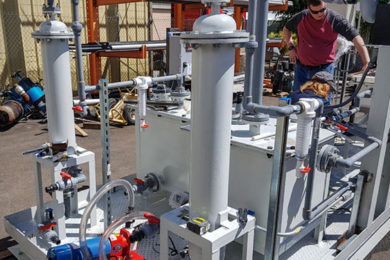 Sixth Wave Innovations Inc says it has signed a three-phase test and implementation contract that will field its patented IXOS® molecular imprinted polymer for extraction and purification of gold and silver at Magnus Resources’ majority-owned Penhalonga gold mine in Zimbabwe.

IXOS has been demonstrated to capture up to 99% of gold from cyanide leach solutions in laboratory and mine site testing where the data was analysed by the mine operator, representing a material increase relative to activated carbon, which recovers between 85% and 95% of the gold, as reported by potential mining customers of IXOS. Additionally, the increased selectivity of IXOS results in the capture of fewer other competitive base metals, Sixth Wave says.

The project with Magnus will be carried out in three phases.

Phase 1 of the project will commence immediately with Magnus sending ore samples to Sixth Wave’s laboratory for extraction and recovery testing. This phase is expected to complete within six-to-eight weeks after receipt of samples and will provide the metallurgical information required for Phase 2. The contract specifies $49,240 for this phase.

Phase 2 of the project will begin upon completion of the testing and includes a mine site visit to evaluate existing infrastructure. Further, Sixth Wave mining experts will obtain necessary data required for the pilot circuit to include historical metallurgical test data, test results from its laboratory analysis, geological data, existing infrastructure and project throughput of 5 t/h. Phase 2 will focus on pilot plant process design, engineering and implementation for gold recovery from oxides at an estimated cost of $26.1 million. The contract contemplates expansion of the process capacity and testing and implementation of additional capability to deal with the transitional and refractory ore.

In addition to the plant for Penhalonga, Phase 2 activities will include testing, engineering design, and delivery/commissioning of three portable VAT leach adsorption/desorption/recovery plants that are capable of processing 100 t/d of ore. The portable plants will be placed in strategic regions of the country to service readily available ore from small and medium sized artisanal miners. It is estimated that each plant will cost between $7.8 million and $11.5 million depending on actual configurations, with currently three plants planned.

Completion of the initial implementations will launch Phase 3 to address the testing and optimisation of extraction for the transitional and refractory ore present at the mine. This work has not yet been costed and scheduled.

Sixth Wave will name Magnus as the exclusive distributor for IXOS®-Au in Africa and the countries that comprise the Gulf Cooperation Council (GCC) as per the initial memorandum of understanding. Term aspects and finalisation will not be addressed until completion of Phase 1.

Nicol Newton, Vice President, Sixth Wave Mining Division, said: “We are very excited about this collaboration and bringing our advanced technology to the mining industry on the African continent and beyond with Magnus Mineral Resources (PVT) Limited. I have been involved in several mining operations including design and commissioning on the continent and within the GCC. My prior experience allows the Sixth Wave team to have a foundational understanding of the challenges and requirements so that we can help ensure the success of the Magnus projects.”

Tanaka Solomon Nyabadza, Managing Director, Magnus Mineral Resources, said: “Magnus Mineral Resources (PVT) Limited is extremely satisfied with the technical depth and analysis that has been provided by Sixth Wave to get us to the point that we can launch the project. We are looking forward to the initial testing data and further defining the design and implementation specifications to maximize the profitability of our endeavours.”