Anaconda Mining’s goal of finding a technology to economically extract gold from the Romeo & Juliet deposit at its Point Rousse operation in the Baie Verte region of Newfoundland, Canada, has gained a global audience since it was named a finalist at the Goldcorp-backed #DisruptMining event earlier this year.

The company’s technology-focused subsidiary thinks a combination of drilling and imaging techniques already proven in the oil & gas industry will provide the technical and economical means to mine the steeply dipping narrow vein mineralisation at the deposit.

The process, Sustainable Mining by Drilling (SMD) is divided into two campaigns: drilling the pilot holes and accurately mapping the vein, then enlarging the pilot holes to predetermined sizes to recover the ore. Using an inclined mast drilling rig, an inclined pilot hole is drilled along the centre line of the vein (equidistant between the hangingwall/footwall) with a directional drilling system.

Steering the pilot holes live with a survey tool will determine the current orientation and refine the 3D model of the vein used to plan the pilot hole enlargement, Anaconda says, adding that once the pilot has been drilled, a large hole-opener can be used to open up the hole’s trajectory up to 2 m in a single pass.

While Anaconda is focused on using SMD to mine its own problem deposit, as with many innovations in the mining sector, the technology looks like having global applications, and not just within mining.

Ahead of IM’s annual focus on narrow vein and low profile mining – to be published in the July issue – editor, Dan Gleeson, spoke with Dustin Angelo, President and Director of Anaconda Mining, to find out, among other things, how SMD can: reduce the cost to extract ore by 50% over conventional underground narrow vein mining techniques; increase operator safety by locating personnel above ground; access areas not open to conventional mining; reduce the environmental footprint of an operation; and bypass the crushing and grinding circuits by moving the +/-2 mm drill cuttings in a slurry direct to the mill.

IM: Anaconda says the technology that has gone into SMD is proven in other industries: what are these industries?

DA: We’re basically adapting technologies that have been used in the oil & gas industry for quite some time; directional drilling and sub-surface imaging. Even though we are dealing with new technology and a new process, what we’re working with, fundamentally, has been used elsewhere in other industries. We’re not reinventing the entire wheel; we’re just adding to that wheel.

We have got patent-pending inventions within SMD related to two key areas – the drilling and imaging. From the drilling standpoint, one of the key considerations we need to address is being in ore right from surface. We have developed some inventions that are added to a pile top drill rig to be able to get the required torque and thrust immediately from surface. We have also created a component that enables a drill string to be more flexible than normal to allow for course change during the hole opening phase.

In terms of sub-surface imaging, we are looking at ground penetrating radar (GPR), which is right off the shelf, but we’re adding some surveying tools to it in order to be able to improve visualisation and more clearly orient ourselves when steering.

IM: How flexible is that drill string? Are there limitations in terms of angle and depth?

DA: We’re looking at a 1 degree change every three metres in the work we are planning to carry out at Romeo & Juliet. And, right now, the depth is down to about 300 m. What we’re using is RC airlift assist to bring the cuttings back up, so the technologies that are out there allow us to go to that depth. Yet, one of the drill manufacturers we are talking to is experimenting with getting down to 400 m; this is all dependent on the angle of the hole. In our field test, we intend to initially go down to 50-100 m depending on how much drill string we want to acquire.

IM: Speaking of your field test, what application are you looking to test SMD on?

DA: The deposit we are looking at trialling this on – called Romeo & Juliet – is, so far, measuring around 3.5-4 g/t Au, which is roughly three times the grade we have been mining in the area at Point Rousse. This is significant for us in terms of grade.

What we’re trying to do with the trial is test the imaging technology and the ability to steer; the ability to put the pilot hole down the hole, roughly half way between the hanging wall and footwall of the vein, and then bring the pile-top drill rig in to enlarge that pilot hole. It is a proof of concept from that point of view.

We’re going to try and select areas of the deposit to test where the dip angle and width of the vein is representative of where we want to be mining. The drill rig we are proposing to use right now for the trial is smaller in diameter to what we propose you can ultimately use SMD for. It’s a 1-1.3 m diameter drill rig, so we are looking for a portion of the vein at Romeo & Juliet with that thickness for the trial. 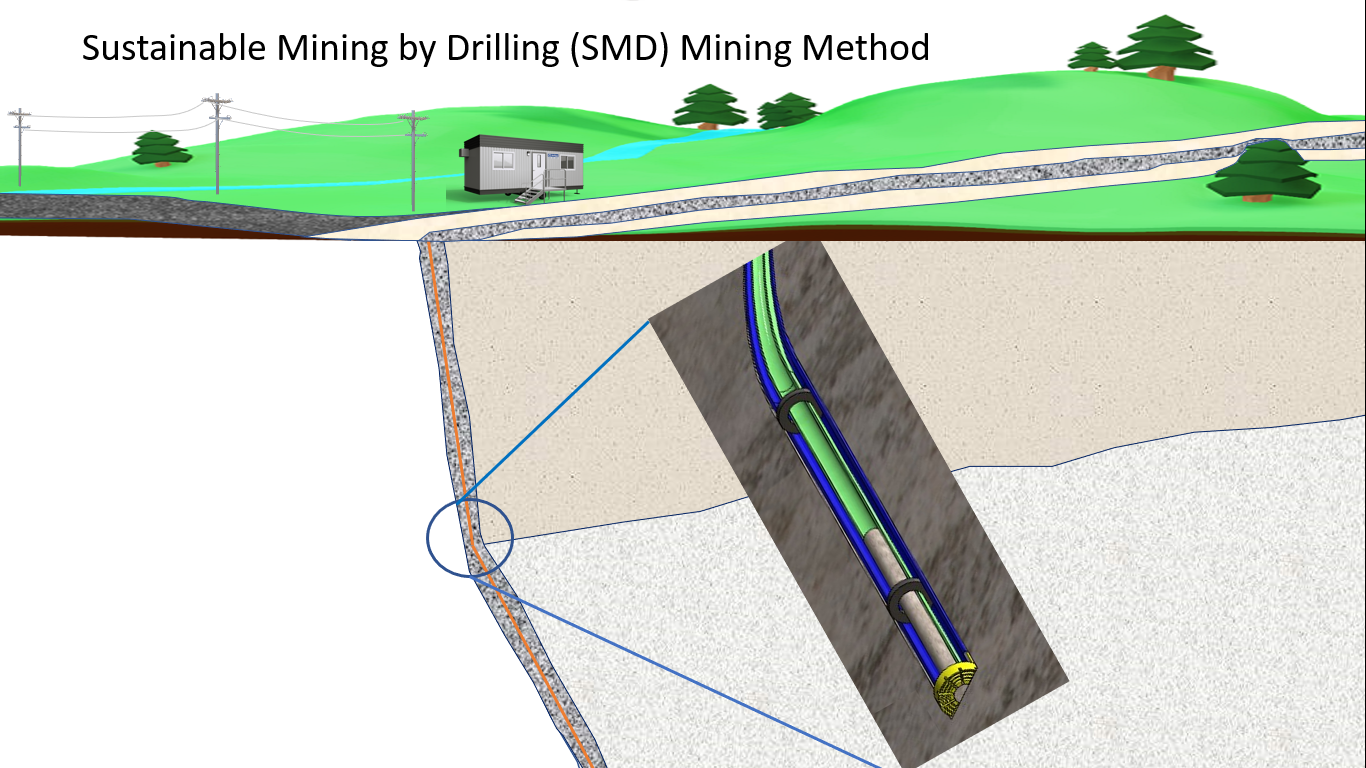 IM: Aside from the Faculty of Engineering and Applied Science at Memorial University of Newfoundland, are there any other partners you are working with on SMD?

DA: Because of the notoriety we got from being a finalist of #DisruptMining, it has accelerated development of this technology in the sense we have had a lot of interest from gold producers and drill manufacturers – we are talking to them about potential partnerships, strategic investments and field trials.

The common theme among all these conversations is that SMD makes a lot of sense and many companies could see it being applied at their sites.

While we haven’t signed any specific agreements with drill manufacturers, if this is a concept that takes off and there is lots of demand for it, it would make sense for them to be involved. They want to sell drills and we’re not going to manufacture drills, so it is an opportunity for them to have another product to sell. We want to licence our technology and the SMD process while providing services to optimise the system by end users.

IM: Have you been surprised by the industry response to SMD since it has been more widely publicised?

DA: It’s not surprising to us that there is global interest, as there are narrow vein deposits all over the world – we’ve had interest from Russia, South America, South Korea, Ghana, the US, Australia, all over the place. We’ve been focused on gold deposits, but it is certainly applicable in other deposits where there is narrow vein mineralisation, too.

One of the interesting things to come out of this exercise, which we didn’t necessarily foresee, is that the imaging technology could also be applicable in mineral exploration, especially with the imaging and GPR capabilities.

IM: Because the technology is new and unproven within a mining context, how do you see companies modelling resources based on SMD to a 43-101-compliant status?

DA: We’re not sure, from a regulatory perspective, how this technology could impact that. I would imagine, at this point, we would need a longer track record to prove its ability to transform uneconomic mineral resources into economic reserves. Once you start to build a history, companies can use that as a legitimate way to delineate reserves that they previously had to leave behind.

That’s the whole purpose of SMD; there are mineral resources in the ground, whether it is whole deposits or certain zones of existing mines that cannot be mined by conventional methods. You can use this methodology in certain cases to extract the ore. If you can do that economically, by definition, it should be a reserve.

Up to this point, most exploration has been about trying to find orebodies to match conventional mining methods; your risk factor here is finding the ore. With SMD, we’re flipping it round; you know where the ore is because you’ve already outlined a mineral resource. It just so happens that it is not economic using conventional mining methods. So, you just need to find a technology that can mine it, which we think we have for narrow vein deposits and zones.

From an exploration standpoint, you can use that image and extrapolate out better than with a conventional drill hole, so, in theory, you can carry out less drilling. Depending on the bandwidth and the GPR, you can look out five metres from where you are currently drilling. This allows you to get a better representation of the orebody and model it more accurately with less drilling.

IM: What is the timeline on SMD demonstrations? And, will the first trial take place at Romeo & Juliet?

DA: It would be Romeo & Juliet first, and we’re targeting late-August/September with the trial lasting around two months.