Wirtgen says its surface miners are helping bauxite producers in Guinea make the most of the high-quality reserves on their doorstep, with 25 of its machines now in operation in the West Africa country.

Wirtgen supplies surface miners in a variety of performance classes for the selective mining of raw materials, such as coal, limestone, bauxite, gypsum, salt and phosphate. In addition to mining, these machines can also carry out routing operations for the construction of mining service roads and railway tracks, the rehabilitation of roadways and installation of tunnel floors.

The range of applications further includes cutting of trenches and channels as well as surface leveling.

In 2001, the first Wirtgen surface miner was commissioned in Guinea in a mine close to Kindia, a small town 120 km from Conakry. Drill and blast was the main bauxite mining technique in use at that time.

“Since then, however, the process has shifted to the more economical, safe and environmentally friendly surface mining, and today Wirtgen surface miners extract 100% of the ore,” Wirtgen said, adding that 25 of its machines are currently in operation in the country.

The most commonly used models for bauxite mining in Guinea are the 2200 SM and the 2500 SM, according to Wirtgen.

“The first is compact yet powerful, with a 2.2 m-long cutting drum and 708 kW of engine power. It is able to cut rock with unconfined compressive strengths of up to 50 MPa, ideal for medium-sized mining operations,” Wirtgen said.

“The larger model, the 2500 SM, guarantees higher production rates and offers a cutting width of 2.5 m, 783 kW of engine power and can economically mine rock with an unconfined compressive strength of up to 80 MPa.”

“Both models demonstrate their advantages in both productivity and product quality, guaranteeing lower production costs per tonne compared to conventional mining. On average, 1.25 Mt of bauxite are extracted each year with the 2200 SM and 3 Mt with the 2500 SM. These figures are achieved because the machines work 24/7.”

These figures are impressive considering Guinea’s humid climate, with a monsoon season that lasts from June to November. This is a major challenge for mining companies.

During periods of heavy rainfall, cutting-to-ground or drilling and blasting expose the ore to precipitation, resulting in high transportation costs due to the ore’s high moisture content resulting in other negative downstream effects.

Wirtgen surface miners, which are equipped with a discharge conveyor, minimise such climactic effects by cutting and crushing the material with a special cutting drum and placing it alongside the machine (sidecasting) ensuring constant productivity while minimising the environmental impact, Wirtgen says.

The use of a surface miner also has a positive effect on water management in an open-pit mine. The cut surfaces are leveled and can be cut at an angle, further improving drainage and reducing water seepage into the ground.

During sidecasting, Wirtgen surface miners leave high stockpiles allowing for a good bucket fill. This protects most of the mined material from the rain and allows gravity to drain the piles.

“Mining with Wirtgen surface miners produces level surfaces that serve as stable roadways, supporting the rapid transport of material. This increases the transport capacity of the entire truck fleet. 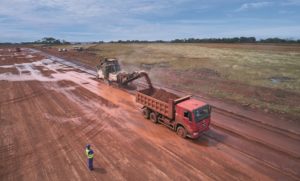 “Even the wear on tyres, frame and suspension is reduced thanks to the quality of the roadways, also allowing the use of standard on-highway trucks. As a result, reduced transportation costs allow mining companies to achieve lower per-tonne production costs.”

Mine operators benefit from several cost reductions when using surface miners, according to Dr Erik Zimmermann, Product Manager for Surface Miners at Wirtgen.

“Our machines allow efficient extraction of material from mines that could not be economically exploited with traditional techniques, creating added value for the industry. For the mining companies, this translates into significant financial advantages for mining and processing,” he said.

By using surface miners instead of drilling and blasting, raw materials can also be extracted effectively in the vicinity of residential areas, public roads, villages, rivers or other infrastructure (eg pipelines or power lines).

It is also possible to mine resources located in buffer and safety zones, maximising bauxite yield within the concession area and generating significant additional revenue for the mine.

“In most cases, the planning and execution of blasting operations is associated with considerable effort, high costs and regulatory restrictions. In fact, eliminating drilling and blasting relieves the people responsible of a number of challenges,” Wirtgen says.

“What is more, dispensing with drilling and blasting has a very positive impact on public opinion, meaning that open-cast mining operations can gain wider acceptance,” the company said.

In addition, Wirtgen machines enable mining companies to improve material quality. The material size produced by these surface miners is ideal for shipment by truck and rail, eliminating the use of the primary crushers commonly used following drilling and blasting.

As Africa’s top and highest-grade bauxite producer, Guinea has increased its production from year to year.

In addition to the customised machine equipment, Wirtgen provides factory-level local customer support through an office in Conakry, which offers complete on-site services such as technical assistance and service contracts using qualified personnel from Wirtgen’s brand headquarters in Germany, the company says.

Technical support is provided directly at the mine, while the company’s logistics programme ensures a smooth provision of original spare and wear parts.

“Wirtgen experts are also able to support customers around the clock with customised, on-site project planning specially tailored to their needs,” the company says.

The project is expanding bauxite production at the mine from 13.5 to 18.5 Mt/y, with Fluor, as the engineering, procurement and construction management (EPCM) services contractor, responsible for the expansion of the mine infrastructure, rail system, port facility and processing plant infrastructure and utilities.

Tony Morgan, President of Fluor’s Mining & Metals business, said: “From developing the local craft workforce to strengthening the economy, this project will have a lasting positive impact on the Kamsar community. Achieving this milestone safely, on budget and on schedule is a testament to the dedication and perseverance of the joint CBG and Fluor team.”

There were more than 1,500 craft workers on site at peak construction. The project team focused on hiring a local workforce, which resulted in Guinean workers representing nearly 75% of the employees on site.

To align the workforce on safe work practices and create a safe work culture at the site, Fluor developed a specialised safety programme. This allowed more than 4 million hours of work to be completed without a lost-time incident.

CBG is jointly owned by the Government of Guinea and the Halco Mining consortium, which includes Alcoa, Rio Tinto and Dadco Investments.

Fluor’s Tony Morgan recently spoke to IM for its annual December issue focus on EPC and EPCM contractors. You can read part of the Q&A here.