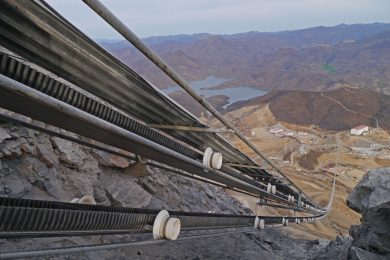 To connect the El Limón gold ore pit with the processing plant it was necessary to overcome an altitude difference of approximately 400 m of steep terrain. Minera Media Luna (MML), a 100% owned subsidiary of Torex Gold Resources, opted for the RopeCon® as a means to transport 1,000 t of gold ore per hour into the valley over a distance of 1.3 km. Along with other aspects, safety and environment were key considerations in prompting the decision

The El Limón-Guajes gold ore pit of MML is located approximately 180 km south-west of Mexico City in the state of Guerrero, Mexico. The ore mined at the two pits of El Limón and Guajes is processed in one central processing plant. The El Limón pit, however, is some 400 m higher up on a steep ridge. During the planning phase, one of the issues that had to be addressed was the transport of the material from the pit down into the valley. Along with the costs, operational safety and the impact on the environment had to be taken into account.

In March 2013, MML decided to use the RopeCon as a means of transport, a system which covers the vertical rise of approx. 400 m and the length of 1.3 km with just one tower structure before unloading the material onto a stockpile. Construction of the RopeCon started in early 2014. Doppelmayr’s assembly team carried out the job in just six months, accident-free and on schedule. The RopeCon started operation as planned in March 2016. It now connects the pit with the processing plant.

RopeCon essentially relies on a flat belt with corrugated side walls to transport materials of all kinds. The belt performs a haulage function and is driven by, and guided around, a drum at both ends. To account for the great vertical rise and consequently the steep incline between the El Limón pit and the valley, the belt has been fitted with cleats to prevent the material from slipping. Axles are mounted on the belt at regular intervals to support it. They have plastic running wheels attached to their ends. These wheels run on track ropes with fixed anchoring and guide the belt. The track ropes run over tower structures so that this conveyor system is lifted off the ground, leaving only a minimal footprint. The system features three track rope pairs in total, with the bottom pair supporting the empty belt and the pair in the middle carrying the loaded belt. An inspection vehicle travelling on the third track rope pair at the top serves to provide easy and safe access to any point along the line. Almost all moving parts are attached to the belt and therefore pass through the stations at regular intervals. Service and maintenance works can thus be performed at one central point.

The El Limón RopeCon system generates about 1 MW of green energy from braking actions, which contributes to a reduction of the overall operating costs. This, and the fact that no fossil fuel (diesel) is required to operate the system is one of the significant differences between RopeCon and trucks, the other means of transport under consideration for the transport of the ore. Apart from the positive effects on operating costs, resulting from straight-forward maintenance and regenerative operation due to downhill transport, the avoidance of dust and noise emissions is another argument which strongly supports the use of the RopeCon. The automatic transport system will also help to enhance operational safety and its controls can be integrated into the central control system of the mine.

The decision to use the RopeCon to transport the crushed ore from the pit to the stockpile in the valley also means that the access road to the pit does not have to be upgraded for truck transport. Access can now be narrower and steeper and can follow a different route. The footprint of the roads can thus be reduced. The RopeCon system as such operates off-ground and does not touch the ground between the loading station and the track rope anchoring point in the valley except with one tower structure. With a height of 44 m, this tower achieves the discharge height required for the stockpile. The span between the loading station and the tower structure is 1,200 m. The conveying angle comes up to 32°. Viewed over the entire life of the mine of an estimated 10 years, the RopeCon will transport approx. 1,000 t of ore per hour from the crusher to the stockpile, from where the material will then be taken to the processing plant.