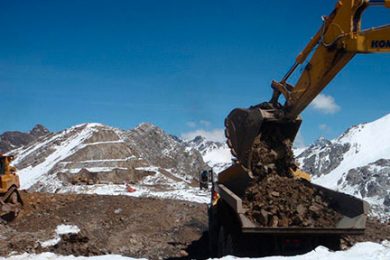 Chinalco is to invest $1.3 billion expanding Toromocho, its largest overseas copper project, in Junin Province. The mine began operations in 2013 and produced 31,407 t of copper and 5,500 t of zinc in the first quarter of this year. Chinalco has signed a preliminary deal with Peru’s government to expand Toromocho.

Other important agreements were signed last week that will see China investing close to $5.3 billion into Peru’s mining sector, according to the Andina news agency.

A similar agreement was reached with Zhongrong Xinda Group to finance the Hierro Pampa de Pongo iron ore mining project in Arequipa, with an investment close to $1.5 billion.

The massive investments are expected to consolidate Peru as the world’s second largest copper producer, behind Chile, Carlos Galvez, President of the National Society of Mining, Petroleum and Energy (SNMPE) said. SNMPE statistics show that Peru’s copper production would reach 2.5 Mlb by the end of 2016, while Chile will close the year at 5.8 Mlb.