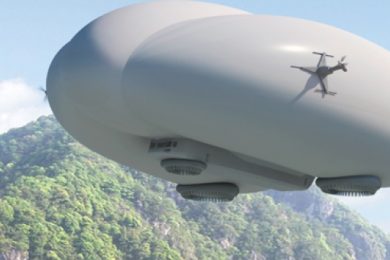 Quest Rare Minerals Ltd has established an agreement with Straightline Aviation (SLA) to provide dedicated air services for the transport of ore concentrate, supplies and personnel using Lockheed Martin’s Hybrid Airships. The airships will provide shuttle transportation between Quest’s Strange Lake complex mine site in Northern Québec and Schefferville, a town with a direct rail link to the Port of Sept-Iles.

Under the Memorandum of Understanding (MOU), SLA will operate a fleet of seven of the world’s first heavy-lift cargo Hybrid Airships (IM, April 2016, Innovation Intelligence article), the LMH-1. The airships will transport personnel, critical supplies for mine operations, and carry more than 200,000 t/y of rare earth ore concentrate for delivery to Quest’s Bécancour refining facilities.

Developed and built by Lockheed Martin, the LMH-1 is well suited to Quest’s transportation challenges due to its remote northern Québec mine site location. The airship has the ability to land on virtually any surface including snow, ice, gravel and even water, with no runways required or other expensive infrastructure. The helium-filled, heavier-than-air airships can carry 20 t of cargo and up to 19 passengers. Both the US Federal Aviation Administration (FAA) and Transport Canada have agreed on the newly developed Hybrid Airship certification criteria, which is being used to complete the type certification. First commercial deliveries are scheduled in 2019.

Hybrid Airships combine the technology of lighter than air aircraft with airplanes, helicopters and hovercraft. Helium provides 80% of the lift, while the remaining lift comes from the aerodynamic shape of the aircraft and its four thrust vectoring engines. The airship also features a unique hovercraft-like Air Cushion Landing System that facilitates taxiing and grips the craft firmly on the ground.

The airships present a cost-effective and environmentally-friendly solution to Quest’s transport challenges. The LMH-1 is not only designed to use less fuel, emit less carbon dioxide and produce less noise than conventional aircraft, it also eliminates the need for costly ground-level infrastructure, avoiding impact on the area’s wildlife habitat compared to road transport and trucking along a road corridor to the Labrador Sea coast.

Quest says “this new transportation solution will also stimulate employment and business opportunities for regional and Indigenous communities increasing the socio-economic benefits to the area around the mine site.

The service agreement represents a value of approximately $850 million, including fuel costs, over a 10-year period that starts in 2019, with further extensions of up to 20 additional years in line with the current projected life of the mine.

Pierre Lortie, Executive Chairman of the Board, Quest: “Quest and SLA make ideal partners – we are well positioned to fully leverage the cost efficiencies and environmental advantages of the LMH-1, and are truly excited to be among the first companies to implement such an innovative transport solution.”

Mark Dorey, Chief Operating Officer, Straightline: “We are looking forward to working with Quest, and believe that our Hybrid Airships will provide significant benefits in reaching remote locations such as the Strange Lake complex. Removing the need for expensive, intrusive infrastructure, it is a significant step in re-defining the way transport works in remote regions.”

Charles Bouchard, Chief Executive Lockheed Martin Canada: “I am thrilled to see Lockheed Martin’s advanced technology coming to the province of Quebec and indeed being sought after to solve transportation challenges in some of the most isolated and northern regions of Canada. It is an ideal country to use the highly innovative Hybrid Airships and I applaud the collaboration between Hybrid Enterprises, Straightline Aviation and Quest Rare Minerals in pursuing such an environmentally-friendly solution in Canada.”