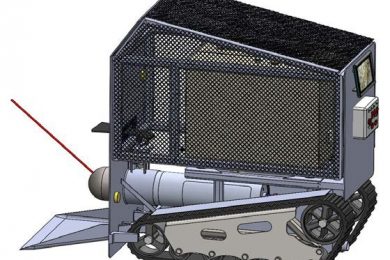 Merger Mines Corporation of Coeur d’Alene, Idaho has announced that it has signed an agreement with Groundhog Mining and Milling, LLC of Dillion, Montana to form a working partnership wherein Groundhog will be the prime field operator of the Merger Laser Miner in its mine rock density characterisation function.

Groundhog Mining and Milling, LLC, led by Delbert Hunt, is a contract mine operator and an equipment sales and repair company in the Inland Northwest. Field operations for Groundhog Mining are directed by Nathan Hunt. Groundhog is a privately held company.

“Signing this agreement with Groundhog Mining marks an important milestone for Merger and our shareholders” stated Merger President Lex Smith. “We have known Del and Nathan Hunt for years and their mining expertise will be invaluable to any party that purchases or leases one of
our Merger Miner laser mining units. Further, our working partnership with Groundhog gives Merger the ability to actively mine properties we acquire with our Merger Miners and by conventional means as well.”

Merger describes itself as the global leader in the development and use of lasers for mining. “This innovative use of lasers and robotics has the potential to change the way mining is done world-wide. Merger’s
innovative mining methods will lower mining costs significantly, and reduce miners’ exposure to dangerous situations they typically encounter when using explosives and traditional mining equipment.”
The Merger Miner makes use of a commercial kilowatt power fibre laser in a patented device for mining in narrow veins of precious metals.

Merger has world class technical experts overseeing the design and manufacture of the robotic laser vein miner arrays, and Merger says it has one of the finest mining engineers in the US to assist the Laser Vein Miner design team with his mine design and operational expertise. They will be working closely at any mining location where Merger is testing and fine tuning the laser arrays, and they will be available to assist mining companies that purchase or lease the mining arrays from the company.

Merger anticipates having its first scan head ready for laboratory testing within the next twelve months. Computer modelling of the narrow (30 in wide) vein miner is well underway and “will see detailed engineering drawings completed within the next fifteen months, with fabrication,
system integration and performance evaluation to follow soon after.”