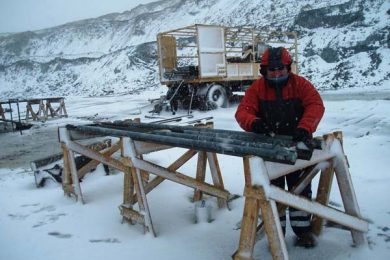 Marnie Pascoe is Director, Geotechnical Manager, Principal Geotechnical Engineer with AMC Consultants. She has been working in Kazakhstan (as pictured) and has provided this interesting report.

The country is the largest of the Central-Asian states that were formally part of the USSR. “It is famous as the host for the Baikonur Cosmodrome, which at present, is the only route for astronauts and cosmonauts to travel to the International Space Station (ISS).

“Kazakhstan has a long history of mining from Catherine the Great’s times through to the present. It remains one of the world’s major producers of natural resources and is one of the ten leading countries in the world for mineral reserves. It is the world’s leading uranium producer, and the third largest chrome producer. It is a large zinc producer and reports 13% of world zinc reserves. Other important minerals include manganese, iron ore, copper, lead, gold, coal, bauxite, phosphate, titanium, and tungsten. Kazakhstan also has a rich endowment of petroleum products and is a leading oil and gas producer.

The government of Kazakhstan appreciates the importance of the mining industry to the country and when President Nazarbayev unveiled the 100 steps national plan there were key reforms for the mining industry, notably steps 74 and 75.

“In mid-2016 the Kazakhstan Code for the Public Reporting of Exploration Results, Mineral Resources and Mineral Reserves was approved by the CRIRSCO committee and so joins the family of international reporting codes under the CRIRSCO umbrella. This move is also expected to assist overseas investment in Kazakhstan by removing the requirement for “double” reporting for international requirements and internal State Ore Reserve Committee.

“Currently the principal law ‘On Subsoil and Subsoil Use’ regulates mining and the allocation of mining properties. A new mining code has been developed based on the Western Australian model, which aims to produce a simplified procedure for granting rights for investors and subsoil exploration. This legislation is expected to become effective in early 2018 and will particularly benefit smaller companies.

“There are approximately 220 registered mining enterprises in the country. The larger domestic companies have been established by local entrepreneurs. Large foreign mining companies, some with local subsidiary companies, active in Kazakhstan include Glencore, Rio Tinto, Iluka Resources, Central Asia Metals Plc, Areva Sa, ArcelorMittal, Yildirim Group, Russian Copper Company and Rusal. There is a national operator of mineral assets in Tau-Ken Samruk, and geological exploration is carried out by the national exploration company is Kazgeology. Both Kazgeology and Tau_Ken Samruk work with foreign companies to explore, develop, and operate assets.

“AMC has been working in Kazakhstan since 2004, during which time it has completed more than 90 consulting projects. The engagements spanned the full spectrum of AMC’s services and clients include some of the major Kazakhstani mining companies, such as Kazakhmys, KAZ Minerals, Kazzinc, Syrymbet JSC, ShalkiyaZinc, JSC AK Altynalmas, along with some of the foreign companies listed above.”

KAZ Minerals is copper-focused and has a number of producing mines. It recently brought the large Bozshakol mine into production, which will double the company’s copper production. Aktogay is the next project under commissioning. AMC was responsible for the geology, geotechnical, and mining aspects of both of these projects.

Syrymbet is conducting feasibility studies on the Syrymbet tin deposit, which is the largest known undeveloped tin deposit in the world. AMC carried out the geotechnical and mining components of the PFS for this project and is appointed for the same roles on the DFS.

Rio Tinto is in partnership with both Kazgeology and Tau-Ken Samruk to explore and develop copper-porphyry style deposits.

Iluka Resouces is in partnership with Kazgeology to explore for mineral sand deposits.