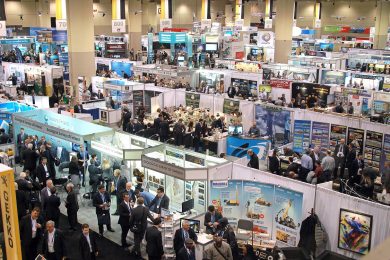 Peter J. Bryant, Managing Partner of Clareo and Board Chair, Development Partner Institute, recently attended the PDAC in Toronto, and wrote an article about the necessity for innovation after meeting with more than 25 international mining ministers.

Bryant attended PDAC 2017 to launch the transformative Development Partner Institute, of which he is the Board Chair, and speak about ‘The Innovation Imperative’ to the International Mining Ministers Summit, hosted by the World Economic Forum and PDAC at BMO’s Executive Center in Toronto.

He says his message was simple and consistent: “The innovation imperative is the greatest it has ever been. The surge in prices should not be viewed as a panacea, but rather the stimulus to accelerate commitment, urgency and investment towards the necessary innovation agenda. It is an opportunity that should not be squandered.”

The Mining Ministers Summit was attended by Ministers from more than 25 countries, such as Chile, Brazil, Mexico, Peru, Portugal, Colombia, Canada, Botswana, Mongolia, Kenya, Mali, Ecuador and many more.

As one of only three speakers, Bryant centred his remarks “on how we can improve the social, environmental and economic outcomes for all stakeholders, particularly the surrounding communities, from the development of the non-renewable resources with which each and every country had been endowed. A new level of prosperity, sustainable beyond the life of a mine, can only be achieved through innovation. This innovation must deliver something that creates value, but must not be confused with invention.”

He continues: “The innovation imperative is stronger than ever. The industry continues to face the same serious headwinds that conspire to undermine the value it delivers to all stakeholders, including:

This is not a normal “boom and bust” cycle, and is not just a problem for the mining companies, but for governments, communities and suppliers as well.”

Bryant said that the Ministers understood this and were universally focused on two key priorities: how do their governments deliver better outcomes to the communities in and around mining projects, and how do they drive innovation in their respective countries?

He offered two perspectives for consideration:

Build shared purpose through a new collaborative approach: The only way to deliver better outcomes for communities is to create an environment where all stakeholders come together in a mutually respectful way, in order to understand what each wants from mining development and arrive at a shared purpose. This requires a radically different mindset from all stakeholders. Following the same old approaches with some incremental changes and hoping for substantially different outcomes simply won’t work. The Development Partner Approach offers a set of guiding principles on how to achieve this.

The government’s role is to create a ‘sandbox with the appropriate guardrails’, so that conversations will accommodate the differences of each development/project yet still align with the same accepted set of principles. The risk is that the more prescriptive that policy and regulations become, the more restrictive they are, perpetuating issues on the ground.

“We had a robust conversation on how this can be achieved. A Minister of Mines from Latin America described his country’s new mandate that 60% of all revenue from mining projects (taxes and royalties) must be invested back into the local communities. There were mechanisms in place to make sure this happened, and that the funds were invested in necessary infrastructure that would underpin future prosperity. A Minister from Southern Africa noted that this approach must accommodate the artisanal miners in and around company operations. He remarked that in his country, there are two million artisanal miners that depend on mining for their economic well-being. Another Minister added that this still must overcome the challenge of his indigenous people’s view that mining was mistrusted and equaled destruction, rather than opportunity.”

In many cases, this approach requires technology to enable new mining methods that can radically reduce the negative environmental and social impacts of current methods, lower production costs, and drive up productivity.

Stimulate innovation and new business development to catalyse greater economic prosperity: “The second perspective I shared was how to stimulate innovation within countries to help develop new technology and businesses across all market segments. Stimulating innovation unleashes the potential of their entrepreneurs in the process, and leverages the wealth generated from mining to act as a catalyst for economic prosperity beyond the mine. This is especially important in order to overcome the long term and persistent under-investment in new technology by the industry. New methods and technologies are critical to address the declining economic performance and increasing demands around the environment.

“The industry must also start supporting and stimulating new businesses that support other vital and strategic sectors for the region, such as agriculture, healthcare, and tourism. One Minister from a major Latin American country lamented how little mining had changed in the last thirty to fifty years, and questioned why there had been so little innovation. Yet another spoke of the increased fragility of ecosystems that demand new technology to minimise the negative impacts of mining.

“The government must provide springboards in order to create an environment for entrepreneurism to thrive and avoid smothering the very baby it is trying to nurture. How can they do this?

“Almost all stakeholders are incentivised and eager to make this happen. It demands an entirely new level of public and private sector collaboration that is based on trust and shared purpose. A new mindset is necessary – one that will challenge existing orthodoxies – because continuing to follow the same paths with incremental adjustments will simply no longer work. Governments will need to work collaboratively with mining companies, communities and other stakeholders to drive towards their shared purpose. Investing the wealth from mining projects in such a way so as to provide for prosperity beyond the life of the mine.”

Bryant concludes: “It is only through embracing innovation, while providing the ‘sandboxes with guardrails’ and ‘springboards’, that we can truly deliver the improved social, environmental and economic outcomes for all stakeholders, especially the surrounding communities, that mining companies and governments seek.”