e-Dumper all electric mining truck becoming a reality in Switzerland 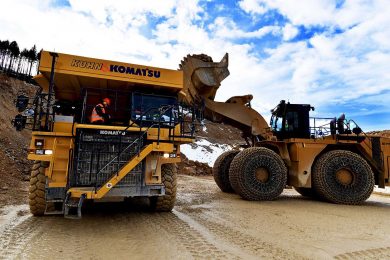 From this Autumn in the Ciments Vigier SA cement operation above Biel-Bienne in Switzerland, a Komatsu HD605 mining truck, which can handle 65 t loads, will transport limestone from the La Tscharner quarry down to the conveyor system. But it will do so in a different way as what sounds like a perpetual motion machine is gradually becoming a reality. The innovative concept of the prototype, backed by the Swiss Federal Office of Energy, is that the Komatsu HD605, converted in Switzerland, will not use diesel fuel or emit any CO2 during the twenty or so trips it makes each day. Instead, the 110 t machine generates electricity on the laden downhill run, which is stored in the largest battery ever installed in a vehicle. Some of this energy is used to power it unladen back up to the extraction area, with the surplus fed into the grid overnight.

Ciments Vigier SA commissioned Arbeitsgemeinschaft (ARGE) E-Dumper, consisting of Kuhn (Switzerland) AG and Lithium Storage GmbH, to build the first 100% electric replacement of a diesel-engined vehicle of identical construction. Vigier is prepared to pay a substantial premium for such a vehicle, since it will not need any diesel fuel over its planned 10-year life cycle and the company will not have to pay any CO2 compensation. The Swiss Federal Office of Energy is making a financial contribution to the non-amortisable additional costs for the development and testing of this prototype and has made it a condition that the know-how acquired in the course of this project benefits the Swiss research and industrial community.

A team of engineers and vehicle constructors, in collaboration with various applied sciences universities (BFH-CSEM Energy Storage Research Centre of the Bern University of Applied Sciences and NTB Interstate University of Applied Sciences of Technology Buchs) and the Swiss Federal Laboratories for Materials Science and Technology (EMPA), set itself the goal of planning and designing this vehicle by early 2017 and constructing it by late summer 2017.

The challenges were expected, but in the final analysis they were enormous: they have now been overcome through an intensive development phase. The consortium is now in the process of building the special components. Measurements taken in the La Tscharner workings, simulations at the universities of applied sciences, the Swiss Federal Institute of Technology (ETH) and the EMPA were used to design the individual components. A vehicle of this performance class has never been constructed; capable of handling gradients of 13% when fully laden in the harshest environmental conditions, with the 700 KWh capacity batteries capable of handling currents up to 3,000 amperes.

During each of the 20 downhill runs, the batteries are charged by 40 KWh, making the vehicle a net electricity exporter or Plus Energy vehicle. This surplus is estimated at up to 200 KWh per day per vehicle. If the prognoses prove correct and the new vehicle proves itself in use, Ciments Vigier SA already envisages a possible additional order and in the longer term might operate up to eight 100% electric vehicles. Kuhn Schweiz AG, a subsidiary of the KUHN group, which sells Komatsu equipment throughout Europe is also considering other applications, such as tunnel-building or construction work in residential areas which are sensitive to exhaust gases and noise. This development enhances Switzerland’s standing as a technology centre and highlights possible new energy futures, true to the motto: safe – clean – Swiss.