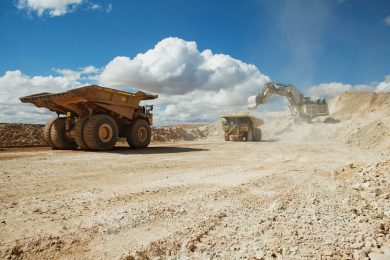 On remote Aniolam Island in the New Ireland Province of Papua New Guinea, about 900 km or two hours flight from Port Moresby, Newcrest Mining extracts gold from one of the world’s largest known deposits of the precious metal. Its Lihir mine excavates within the geothermally active caldera of an extinct volcano, yet one of the biggest employee-safety challenges is managing mining-vehicle interactions in the open-pit operations.

“Mining fleet interactions, whether that’s vehicle-to-vehicle or vehicle-to-personnel are definitely one of the highest safety risks for us,” says Tony Sprague, group manager of Mining Technology for Newcrest Mining Ltd. “We have many vehicles in operation and with heavy vehicles, ancillary vehicles and light vehicles operating together, it doesn’t take much to have a critical event or a significant potential incident” (SPI).

“On all our sites we’ve continued to have these significant potential incident events, year on year, and we decided we want to be proactive and use technology to help us help ourselves,” says Sprague. “Every individual is important to us,” he emphasises, referring to Newcrest’s safety ethos which works towards “zero injury” and promotes the belief that “all injuries are preventable”.

The GPS-based, camera-enabled and detection-proximity system selected by Newcrest will tag all personnel active in the mine’s production area and alert them and the operators of heavy mobile equipment with two-way alarms when they’re in dangerous proximity to one another. Around 1,500 employees and contractors across all shifts at Lihir will be protected.

The GE CAS system has been developed over almost two decades by engineers in New South Wales, Australia. Among its features: it ensures high integrity by deploying multiple proximity-detection technologies including GPS, cameras and radio frequency according to site requirements; it is self testing, automatically reporting in real time any failure within the system; it is equipment agnostic — it can be applied to any make of mining equipment; and it provides sophisticated monitoring and back-to-base reporting which, in addition to facilitating safer mining operations, may be analysed for productivity gains and improved maintenance

“At the moment it’s an operational-awareness system,” says Sprague, referring to the fact that the Lihir system will flag with both the operators of vehicles and with people on foot, that they are in potentially dangerous proximity to each other. On driver-operated heavy equipment, a proximity alarm will immediately activate a camera covering the area of proximity, and give that view on a touchscreen in the cab, so that the driver can clearly see and respond to the risk. Each heavy vehicle will have cameras positioned to give operators 360o vision of their surroundings as needed.

One of the reasons Newcrest chose GE’s Digital Mine technology is that “it’s not far away that the system will provide real collision-avoidance capabilities where the vehicle itself will respond in certain situations,” says Sprague. Evasive action might then include system takeover of the vehicle, applying the brakes and potentially steering around an incident.

Craig Hoffman, product manager of GE Collision Avoidance and Geospatial Systems, who has worked in R&D and marketing of the system since 2000, says GE has a clear roadmap to evolve to the abovementioned Level 9 Intervention Controls — an industry goal, and an international standard tabled by the Earth Moving Equipment Safety Round Table (EMESRT), of which Newcrest is a member. The system being installed at Lihir is currently rated Level 7 Situational Awareness, and already incorporates some Level 8 Advisory Controls capabilities.

Says Sprague, “When we were doing our review process for different solutions, we didn’t just land on GE. We started with a group of nine credible solutions and we narrowed the field down. GE’s roadmap to take us to Level 9 is well defined.”

And Newcrest already had runs on the board with GE CAS.

Last year, the miner began installation of GE CAS at its Telfer mine site, which extracts copper and gold in the East Pilbara region of Western Australia. Newcrest intended, once it had verified the benefits of the system in this smaller deployment (140 vehicles), at a more accessible operation, to continue the technology rollout to Lihir (250 vehicles).

But before the Telfer installation was fully bedded down, Newcrest decided, “We were comfortable to the point where we wanted to move on Lihir even earlier than we’d initially planned,” says Sprague. “We’re delving into the reporting data and observing definite safety improvements. Our senior management team has seen that and has sought to accelerate the deployment to our other sites.’”

Ensuring effectiveness of safety equipment and procedures is always dependent on the compliance of the workforce. Newcrest’s strong safety culture and genuine care for its employees creates a conducive environment for adopting new approaches. Before the company began implementing CAS at Telfer, Sprague says, “We got on the front foot in terms of communications rollout and socialisation.” The company focused not only on the safety benefits of the system, but also the benefits of increased situational awareness to assist heavy-vehicle drivers.

“Unlike most new cars today, haul trucks generally don’t have reversing cameras,” explains Sprague, “so drivers have to back up relying on their mirrors and their experience.” Having greater visibility provided by four robust, wide-view cameras — front, back, left and right — that they can toggle on and off as needed, has been appreciated by heavy-vehicle drivers at Telfer. “It lowers their stress levels and enables them to back up to tip heads and crusher pockets with greater situational awareness,” says Sprague.

Wherever Newcrest operates, it strives to provide employment opportunities for local people. At Lihir, around 90% of employees are Papua New Guineans. “Whether we’re in Africa, Indonesia or PNG, we have employees from local villages and towns, and driving a car may be unfamiliar to them,” says Sprague. “We train them to be truck operators or heavy-vehicle operators, but this system provides them with additional tools to improve their situational awareness and visibility of their surroundings.”

Newcrest’s technology and innovation team is working on other plans to improve safety and productivity in its worldwide operations. Sprague sees the GE CAS system as “one of the building blocks for where we need to get to”.

GE is working in partnership with Newcrest, and with other technology suppliers to enable collaborative solutions. For example, says Sprague, “We’re already taking some of our shovels and dozers and putting in tele-remote capabilities, so the operators will be sitting in a cabin a couple of kilometres away. We can use GE proximity detection to help facilitate safe operation of those vehicles — even though there’s not a person in them we don’t want those pieces of equipment bumping into each other.”

And while safety of each open-pit worker is Newcrest’s priority, Sprague says the company is also interested in the potential for data-analysis of historical data using GE CAS. “Another reason we selected this system is the reporting aspects that come with it, with data linked by GPS and by time.” For example, he envisages being able to identify and interrogate the reasons behind recurring maintenance events: “We can delve into the data and ask what’s going on. Do we have issues with our haul-road design, speed limits or site layout?”

Newcrest is thinking ahead: safety legislation mandating the application of collision-awareness systems to mines has been enacted in South Africa, but not yet in Australia or in Papua New Guinea. Eventually, Sprague says, such legislation is likely to spread, but, “We just think, why would we wait to be told to do it?”