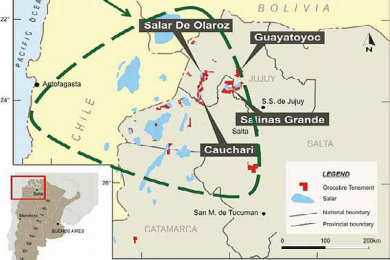 The US Geological Survey and the Geological Mining Service of Argentina (SEGMAR), reports that there are 53 lithium exploration projects in Argentinian properties, according to MinerAndina. This information is contained in the Argentina Lithium Map generated by both institutions.

The report was disseminated by the Ministry of Mining and Energy of Argentina and gives account of the areas where the highest concentration of said mineral is.

These are the provinces of Jujuy, Salta and Catamarca, “although this can even increase thanks to the investigation processes in different sectors of the country”, the ministry said. Argentina hosts 13.8% of the world’s lithium reserves today and 19.1% of the identified resources. At the investment level, the 53 projects currently underway imply the arrival of $2 billion in capital.

“Argentina has a great potential with its current activity and the country is on its way to become one of the world’s largest lithium producer, which is not only useful in batteries, but also in medications, glass and clay and in different alloys”, the report states.

Mining activity in Argentina is currently growing, thanks to the implemented legislation by which the current government has improved the situation for companies. Also, the lithium boom boosts the sector’s growth.