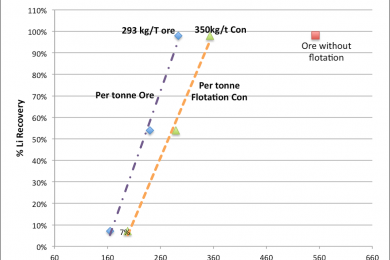 “This is an exceptional result and a very significant breakthrough as we are not aware of any other lithium deposit where heap leach processing has been successfully demonstrated. Rhyolite Ridge’s unique combination of minerals and low clay content is the key to efficiently recovering lithium and boron via heap leaching,” explained GSC Managing Director Bernard Rowe.

The project lies 25 km west of Albermarle’s Silver Peak lithium mine and 340 km from the Tesla Gigafactory near Reno.

At South Basin, high-grade lithium-boron mineralisation occurs in 20 to 50 m thick, sub-horizontal sedimentary layers. The upper-most layer is 20 to 30 m thick and outcrops along the western margin of South Basin over a strike length of approximately 3 km.

Drilling at South Basin has defined an Indicated and Inferred Resource of 460 Mt at 0.9% Li2CO3 and 2.6% H3BO3), containing 4.1 Mt of lithium carbonate and 11.9 Mt of boric acid. The Resource is open in most directions and is likely to increase in size with additional drilling.