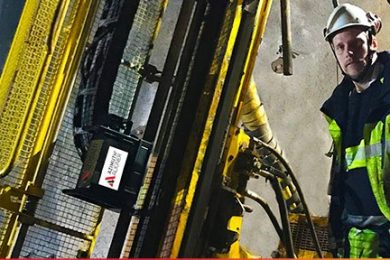 Styrud Arctic is a European drilling contractor working for LKAB Mining in Sweden. The Kiruna mine site is the world’s largest underground iron ore mine, located in some of the most challenging conditions on the planet – some 640 km north of the Arctic Circle!

The close proximity to the magnetic North Pole, coupled with freezing cold temperatures, meant that the drilling contractor had always found it difficult to gain accurate readings from traditional gyroscopic measurement devices.

This would lead to holes having to be re-drilled; a costly and time-consuming exercise – particularly given the overall size of the mine (over 330 km of underground drifts). Rig down-time was unacceptably long whenever holes had to be re-located.  For example, surveyors may not be able to arrive on-site for between 3-5 hours.

This impacted significantly on productivity for Styrud Arctic and the mine, who were forced to wait overtime for core samples – leading to delays further down the track into production.

Minnovare says its Azimuth Aligner (AA) “is the most reliable drill-rig alignment technology in the world (accurate to within +/-0.2°). Minnovare’s engineers joined a team of (somewhat understandably) sceptical surveyors and geologists and travelled to the most magnetic parts of the mine to survey the AA’s accuracy.”

In every situation the AA performed better than expected – providing the most accurate down-hole alignments ever recorded at the mine, despite the highly challenging conditions.

The drill rig set-ups were completed within just five minutes, with no assistance required from surveyors, thanks to the Azimuth Aligner.

The vastly improved accuracy ensured the drill teams achieved minimal deviation from the plan, and with rig set-up achieved in minutes, the potential for extended down-time was effectively eliminated.

The gains for Styrud Arctic have been dramatic: The AA immediately contributed to an increase in the average metres drilled per shift and revenue per operating rig (ARPOR). For the mine, core sample delivery times were slashed and the cost-per-drilled metre significantly reduced.

All of which translates to a substantial increase on the bottom line for both the drilling contractor and the end client.

“The Azimuth Aligner saved us a lot of time. It performed exactly as promised, which is not always the case with equipment suppliers!” – Joakim Kemi (pictured), Managing Director, Styrud Arctic.