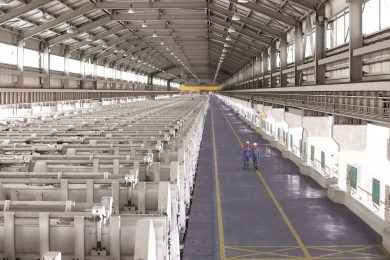 Emirates Global Aluminium (EGA), the largest industrial company in the United Arab Emirates outside oil and gas, has signed an agreement with the European research and technology organisation VITO to assess the viability of using bauxite residue, an industrial by-product, in large volume construction materials.

VITO will work closely with experts at the University of Leuven in Belgium to assess the technical and commercial potential of using bauxite residue in the UAE in the manufacture of materials ranging from road base to cement and concrete, and even for refractory bricks for EGA’s own aluminium smelters.

Bauxite residue is a by-product of alumina refining – the process of turning bauxite ore into alumina which is the feedstock for aluminium smelters. EGA is constructing the first alumina refinery in the UAE, next to its Al Taweelah smelter in Abu Dhabi.

While new productive uses are being developed, EGA will operate a dedicated bauxite residue storage site in line with current world-class best practice, about 30 km inland from the coast in Khalifa Industrial Zone Abu Dhabi. When Al Taweelah alumina refinery starts production, bauxite residue will be washed, pressed into a dry cake, and transported to the area for permanent managed storage. The site will eventually be covered and used for other industrial purposes.

Abdalla Alzarooni, EGA’s Vice President of Technology Development & Transfer said: “Using bauxite residue as the raw material for construction products is one potential solution we are investigating for bauxite residue. Finding viable uses for this by-product is a challenge for our industry globally, but we aim to reduce and even eliminate the need to store new bauxite residue in the longer term.”

EGA is also working with The University of Queensland’s School of Agriculture and Food Sciences to investigate combining bauxite residue with agricultural and domestic wastes to create a soil for greening and other uses in the UAE.