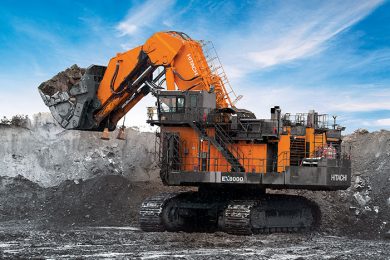 According to reports in Nikkei Asian Review, Hitachi Construction Machinery forecasts a whopping 473% jump in net profit to 46 billion yen ($422 million) for the year ending in March 2018, thanks to brisk sales of construction equipment and parts for mining machinery. “The amount beats the previous projection, released in October, by 16 billion yen. The Japanese machinery maker upgraded its forecast Monday upon announcing April-December earnings.”

“Sales now are expected to climb 23% to 930 billion yen, up from the 18% increase to 890 billion yen in the previous forecast. Revenue from Chinese operations is projected to rise 52% to 108.3 billion yen — 21.4 billion yen above the prior estimate – amid ongoing investment in infrastructure such as roads and railways.”

“The Hitachi group unit also raised its sales projection for parts and services tied to mining equipment, a highly profitable business, by 3.1 billion yen to reach 94.6 billion yen for this fiscal year. Machinery that miners took out of service due to a slump in resource prices has begun “moving again” with prices recovering, and ‘demand for parts is growing’, said Executive Vice President Yasushi Ochiai, in charge of mining equipment operations.”