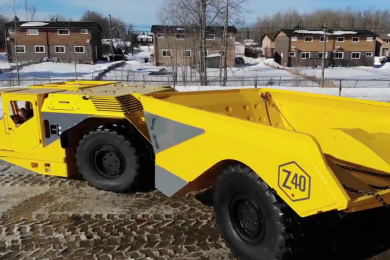 Artisan Vehicles has unveiled its Z40 underground truck, the first model of which will be used by Kirkland Lake Gold. The truck is not only battery powered but the company says is the smallest underground model capable of handling 40 t in the world. It uses four electric motors, which have been part of the design all the way from proof of concept to final design. The company says the use of four motors is part of trying to ensure the most efficient truck possible, with no torque converter and no transmission, while minimising the brake drag as much as possible. These are all contributors to better battery life, more efficiency and lower heat generation.

The operator does not have to leave the cab; the Artisan changeout system sees the machine battery loading and unloading automatically without the need for a hoist or crane. The operator presses a button and the battery cage comes out and drops to the ground, then the machine using the onboard tramming battery backs up to the heading and picks up the other battery and is then ready to start the next production cycle. The swap station can be moved with very little effort from a mine standpoint. Artisan says the industry initially believed that a zero emissions battery truck would be limited from a practical point of view to around 20 t.

“The Z40 is a game changer for our Macassa mine site” said Tony Makuch, CEO of Kirkland Lake Gold. “Being able to haul significantly more ore in each truckload means more production with a smaller truck fleet. This truck is a critical part of our expansion plans here in Kirkland Lake.”