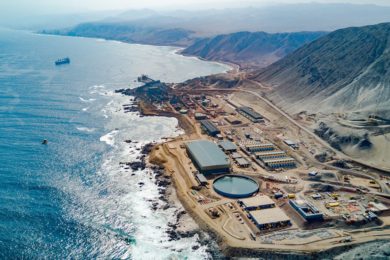 In a ceremony which took place today at Puerto Coloso, Antofagasta, Minera Escondida inaugurated a 2,500-l/s desalination plant to supply the mine’s needs. The new plant is in addition to the company’s 525-l/s plant, which has been in operation for twelve years.

The new plant is at the heart of the company’s water strategy, which consists in increasing the use of desalinated water and recovering more water from its processes as a means of gradually reducing withdrawals from aquifers.

Construction of the plant required an investment of $3,430 million. This included two 42” pipelines to transport the water to 3,200 m above sea level, four high-pressure pumping stations, a reservoir at the mine and high-voltage electricity infrastructure to operate the system.

In order to ensure the electricity for pumping the water, BHP awarded a long-term contract for the development of the Kelar Power Plant, which was originally designed to use coal but was converted into a combined-cycle natural gas plant in order to have energy from a cleaner source.

“The plant we are inaugurating today required 45 million man-hours of work, a challenge that was notable for an outstanding performance on safety, our most prized value,” said Mauro Neves, President of Minera Escondida. “At present,” he added, “we are operating three concentrators simultaneously, an unprecedented situation in the mining world, giving us a greater processing capacity with which to maintain our copper output. In this, the new desalination plant plays a crucial role.”

Daniel Malchuk, President of BHP Minerals Americas, indicated that “this plant reflects our deeply held belief that it is possible to practice sustainable mining, which is both an ethical imperative and a fundamental condition for the business. In Chile, we aspire to cease using fresh water altogether as from 2030. We have progressed in this transition and will continue to do so gradually over the next ten years.”