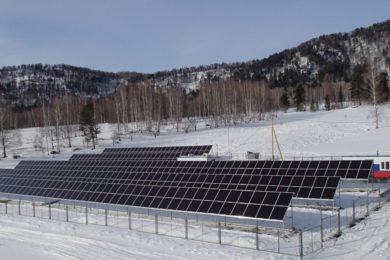 The 1 MW solar power project is designed to supply electricity to mining facility in order to enable reduction of diesel power generation which is the main source in off-grid areas.“Our mine is located in remote area, which is why decrease in fuel consumption by the camp and m ining infrastructure is of high importance,” said a representative of the mine. “Once the PV power plant is put into operation annual economy can achieve 250 t of diesel fuel.”

In 2017, Hevel Group began producing of heterojunction solar modules and cells with an efficiency rating over 22%.
Annual output currently stands at 160 MW and this production capacity is set to grow as the group pursues its development’s strategy.

In March 2018 Hevel announced that its R&D centre had undertaken testing procedures to measure performance parameters of heterojunction PV modules at extremely low temperatures. Panels were placed for 48 hours in a climate chamber at -60 0С which could be equal to operation in the high Arctic climates. At the final stage of R&D testing program PV modules were exposed to thermal cycling at high and low temperatures during 50 cycles.
Test results proved reliability and stability of solar modules at temperatures below -40 0С, encouraging Hevel Group as PV projects develop to utilise solar modules in projects located in a cold environment such as for mines.By the end of 2018 Hevel Group will have performed an analysis of test results and launched engineering of PV systems for energy supply of different infrastructure in areas with extremely low temperatures.