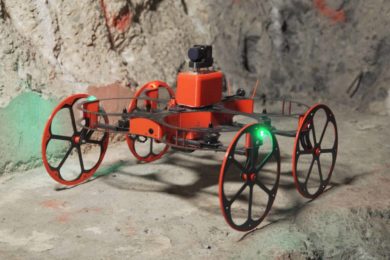 Inkonova recently demoed the Batonomous navigation system for its TILT Ranger and TILT Scout underground drones in Gällivare with LKAB. With the Batonomous System, the drone can be automated to fly and survey with a click on a screen without manual piloting or GPS and with real time mapping to help navigate constricted spaces. In this demo, untrained LKAB personnel commanded the drone by waypoints around a warehouse.This test follows earlier testing in Atlas Copco’s test mine.

This is the latest development for the TILT Ranger, a unit of which was also shipped to the Canadian company Robotics Centre in January for their use in the mining operations in the US and abroad. Training was conducted in Inkonova facilities at Stockholm. Training included operating and piloting the drone in both outdoor and indoor scenarios, with varying conditions.

“The TILT Ranger is a drone particularly suited for underground areas like mines and tunnels. It has been developed to be compact yet with high payload capacity thus, able to carry a full 3D LIDAR system. It also features our dynamic tilting arms technology we developed first for the drone racing market but that it turned out to have more value for industrial drones like the Ranger. Tilting the arms provides several advantages like the fact we can hover and fly at different body angles or roll on ground.” Literally the system the company says “flies, runs, climbs and scans inaccessible zones to save lives, time and money.”

The new TILT Scout is “economical, lighter and smaller for supple inspections demanded by tighter spaces like pipes and tanks. It complements the Ranger by lower risk pre-inspections of underground zones before scanner fly-ins with the costlier, bigger Ranger.”

Inkonova recently told Drone Below, the drone technology website on experience to date: “We flew in LKAB’s mine in Kiruna (Sweden), the largest and most modern underground iron ore mine in the world, Boliden’s mine Garpenberg, Sweden’s oldest mining area that is still in operation, NORCAT test mine in Sudbury (Canada) and others. It is also worth noting that we also demoed our product in the past in Mali, Peru and Argentina.”

The Mali test saw the TILT Ranger commissioned to scan three inaccessible stopes in the Loulu underground gold mine in Mali. BVLOS (Beyond Visual Line of Sight) flights were conducted for some stopes. Current solutions they use (boom-mounted CMS) can’t scan certain spots, creating blind zones. Such data is critical to mine operators and surveyors. For two stopes, a 3D model was generated using the application of SLAM to the laser scan acquired. For the third stope, intense smoke prevented the scan from completion.

In terms of range and other specs, the company added: “…underground and beyond line of sight, every case is different. What I can refer to is to past experience: We have been able to fly during our tests in Sudbury, Canada, up to 200 m beyond line of sight. Other tests in a test mine in Sweden gave us 120 meters range beyond line of sight. Communication is the main issue today since we are automating the whole flight and scanning but we still need to receive telemetry and the area’s map in real-time.”