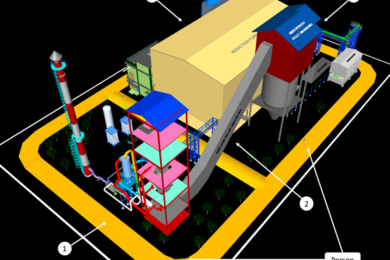 Environmental Clean Technologies Ltd announces the commercial terms of the Master Project Agreement (MPA) ahead of the scheduled signing ceremony in Canberra on May 24 2018. This refers to the world’s first Australian-designed Coldry and Matmor plant for power generation and steel making. Key points:

The agreement represents a milestone for both India and Australia in demonstrating positive support and bi-lateral benefit under the Australia-India Comprehensive Economic Cooperative Agreement.

NLC Chairman-Managing Director, Dr SK Acharya will lead the delegation to sign the MPA. The company is in the process of confirming the availability of relevant Ministers to attend the signing ceremony.

The visit follows approval by NLC and NMDC to sign the MPA with ECT to establish the world’s first Australian-designed Coldry and Matmor plant in Tamil Nadu state, India to diversify the use of lignite (brown coal) in the generation of electricity to include the production of steel at lower cost with significantly lower CO2 emissions.

ECT Chairman, Glenn Fozard commented “Matmor represents the most significant departure from primary iron making since the advent of coke-based smelting in 1709. By utilising a predominantly hydrogen-based pathway, Matmor enables the use of abundant, lower cost alternative raw materials and lower CO2 intensity.

“We believe Matmor is positioned to revolutionise primary iron making thanks to its unique chemistry and efficient furnace design. Matmor’s ability to utilise alternative, lower cost resources such as iron ore fines and lignite to produce iron and steel helps to address the real-world issues faced by India as it strives to mitigate emissions intensity in the face of ambitious growth targets.

“India is the perfect place to develop our technologies and India’s national iron ore and lignite miners, NMDC and NLC, are ideal partners.”

Commencing with an ~A$35 million R&D phase, the project aims to scale up ECT’s Matmor and Coldry technologies to deliver an integrated Coldry demonstration and Matmor pilot plant to validate their technical and economic feasibility at a capacity of ~2 t/h of metal.

Following successful phase one R&D outcomes, the agreement provides the framework to proceed with a commercial-scale integrated steelmaking facility. The parties have previously contemplated the potential scope for the commercial phase via the techno-economic feasibility study completed in July 2016, which includes a notional capacity of 500,000 t/y steel output and an estimated A$300 million capital investment. The site for the R&D plant has been chosen to allow room for expansion into a commercial-scale facility.

Matmor is the world’s first and only lignite-based primary iron making technology capable of replacing metallurgical coal and high-grade lump iron ore with lower-cost alternative raw materials thanks to its unique chemistry and furnace design.

The process is built on a unique chemical pathway that utilises hydrogen, enabling lower operating temperatures and shorter process times than the traditional blast furnace route.

The anticipated lower cost of the Matmor technology when commercialised provides a realistic basis for achieving zero-net CO2 emissions from primary iron production, a goal which has eluded the commercial world of steel making despite many attempts.

Coldry is a unique, zero-emission, lignite upgrading technology capable of producing a solid fuel for use in power generation, industrial thermal applications and as a feedstock to higher-value downstream applications such as coal to liquids, gas, fertiliser, chemicals, chars, activated carbon, hydrogen and steelmaking (via the Matmor technology). Coldry solid fuel is significantly less CO2 intensive than lignite.