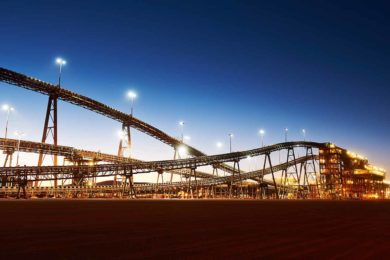 The BHP Board has approved $2.9 billion (BHP share; $3.4 billion 100% in capital expenditure for the South Flank project in the central Pilbara, Western Australia. BHP President Operations, Minerals Australia, Mike Henry, said the South Flank project will fully replace production from the 80 Mt/y (100% basis) Yandi mine, which is reaching the end of its economic life.

“South Flank is a capital efficient project which offers attractive returns, and which was approved following a thorough evaluation under BHP’s Capital Allocation Framework,” he said. “The project will create around 2,500 construction jobs, more than 600 ongoing operational roles and generate many opportunities for Western Australian suppliers. It will enhance the average quality of BHP’s Western Australia Iron Ore (WAIO) production and will allow us to benefit from price premiums for higher-quality lump and fines products.”

The South Flank project expands the existing infrastructure at Mining Area C, and involves construction of an 80 Mt/y crushing and screening plant, an overland conveyor system, stockyard and train loading facilities, procurement of new mining fleet and substantial mine development and pre-strip work.

First ore from South Flank is targeted in the 2021 calendar year, with the project expected to produce ore for more than 25 years.

South Flank iron ore will contribute to an increase in WAIO’s average iron grade from 61% to 62%, and the overall proportion of lump from 25% to some 35%. It is expected to have a strip ratio in line with the WAIO average.

In June 2017, BHP approved an initial funding commitment of $184 million (BHP share), primarily for the expansion of accommodation facilities to support current and future workforce requirements.