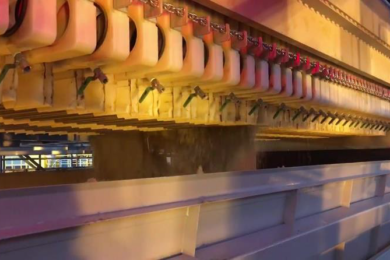 The successful production of the initial spodumene and tantalum concentrates is a significant commissioning milestone, marking a key step on the path to full production as Pilbara Minerals begins its transformation from developer to become a pre-eminent global lithium and tantalum raw materials producer.

The picture shows fines spodumene concentrate discharged from the filter press at Pilgangoora. The initial concentrate has not been tested for specifications or quality, however early signs indicate that the process plant and equipment is performing as expected.

Pilbara Minerals’ Managing Director and CEO, Ken Brinsden, said the production of initial fines concentrates was a significant and exciting milestone, coming just a week after the commissioning process commenced at the Pilgangoora concentrator.

“This is a great result, which marks the culmination of the incredible hard work our entire team has put in to transform the amazing resource at Pilgangoora into a globally significant lithium raw materials production base – with Stage 1 of the project having been delivered in less than four years since the first drill hole,” he said.

“Pilbara’s great people and all of our important partners have done an amazing job. The Board is very proud of their achievements – which stand-out for the strong technical work supporting the project, the quality of the build and the speed with which the entire project has been delivered.

“Add to that the incredible scale of the resource, our ability to continue to expand production, the quality of our products and the expected low-cost of operations – and you can see why Pilgangoora is one of the world’s leading lithium production and development projects,” he added.

The first fines concentrate at Pilgangoora was produced through the flotation circuit, with the coarse concentrate circuit (referred to as heavy/dense media separation (DMS)) continuing to be constructed and to be brought online in the coming weeks. The fines circuit was prioritized during commissioning for the higher proportion of product that is yielded through this circuit at the start of production. Over the coming weeks all remaining construction activities (primarily within the coarse circuit) are expected to be completed with further commissioning and testing to then be undertaken through the combined coarse and fines circuit.

The company will target delivery of its first shipment of spodumene concentrate in August of this year and is currently in the process of working through the remaining logistics, shipment and payment details consistent with its Stage 1 off-take agreements with its partners Ganfeng and General Lithium.

Following the initial commissioning of the flotation and DMS circuits over the next six weeks, Pilbara’s operating team will then focus on continuing to ramp-up the plant’s overall production capacity, with lithia and tantalite recoveries expected to match the designed Stage 1 capacity. This process is anticipated to take approximately six to nine  months, with production expected to incrementally increase during the ramp-up period.

Direct Shipping Ore (DSO) production is expected to continue within this period. DSO mining is currently well ahead of the shipment program with excellent reconciliation to the required shipment specifications being achieved during mining.

DSO invoicing in line with the DSO Sale Agreement with Atlas Iron Limited has already occurred, with payment for the first month’s production (May 2018) already received.

Roskill notes the the agreement with General Lithium was for 140,000 t/y of 6% chemical-grade spodumene concentrate from Q1 2018 for an initial six-year period, with an option to extend for a further four years. This represented over 40% of Pilgangoora’s anticipated initial annual output from the Phase 1 project.

A smaller offtake agreement with Ganfeng Lithium is for around 30,000 t/y of LCE (lithium carbon equivalent). This includes 160,000 t/y of chemical-grade spodumene over an initial term of ten years, with two five-year options to extend up to a further ten years.