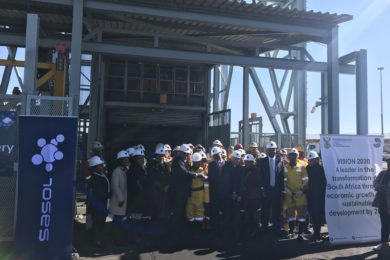 Sasol has inaugurated its new Shondoni coal mine in Mpumalanga, South Africa, as part of a ceremony attended by Minister of Mineral Resources Gwede Mantashe.

Shondoni is part of the company’s ZAR14 billion (US$1.03 billion) mine replacement programme, which is geared towards keeping its southern African power facilities operational until 2050.
Meaning ‘a place of wealth’, Shondoni replaces Sasol’s Middelbult mine, which has reached the end of its life.

The mine is modern in many respects, according to Sasol, and is differentiated from the rest of its other five coal mines in its use of renewable energy, which includes the use of solar geysers to heat pumps.

The mine also holds the record of having the longest single flight conveyor without an intermediate booster drive in Africa, at 21km. The whole mine site has seven conveyors with a total approximate length of 30km, which require some 5MW of energy, according to one of the project contractors ELB Engineering.

Over the next 30 years, Shondoni is expected to deliver between 8-9 million tonnes of coal per annum.

Sasol Mining is South Africa’s third largest coal producer and runs one of the world’s largest underground coal-mining complexes. It produces over 40Mt of coal annually of which more than 90% is used as critical feedstock for the production of Sasol’s high quality synthetic fuels and a wide range of chemicals.