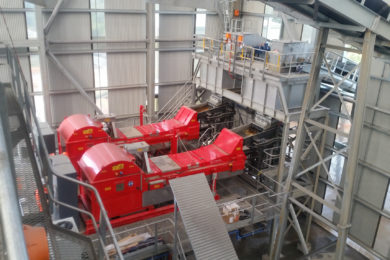 Metals X and its joint venture partner Yunnan Tin have commenced commissioning of its new crushing and ore sorting facility at the Renison tin mine in Tasmania, Australia.

The ore sorting equipment, provided by TOMRA, is expected to increase annual tin production at Renison by 15-20%, according to Metals X.

Underground ore production at the 50:50 owned Bluestone Mines Tasmania JV is expected to increase to approximately 920,000 tonnes per year, while maintaining the processing plant at some 720,000 t/y.

The TOMRA X-Ray transmission ore sorter will reject an estimated 200,000 t/y of waste at the crushing stage, upgrading the ore before the processing plant.

In preparation for the introduction of ore sorting, additional areas within the underground mine have been developed, production rates have been increased and a significant surface stockpile of ore accumulated.

The purpose-built three stage crushing, screening and ore sorting plant has been constructed at a capital cost of some A$15 million. The payback is estimated to be less than 10 months at current tin prices.

With the commissioning of the ore sorter and the new tails dam already in operation, the major capital expenditure programme at Renison is complete.

“The operation is now set up for the long term future, with increased production capacity and additional flexibility to allow the … JV to exploit the large resource base at Renison,” Metals X said.

XRT sorting technology is increasingly being used in the mining sector in order to reduce the amount of waste processed through the comminution circuit. This, then, boosts the overall ore grade.