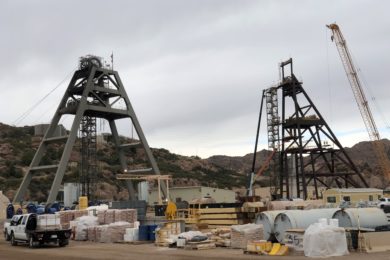 Resolution Copper (55% Rio Tinto; 45% BHP) has confirmed that rehabilitation work at its No 9 Shaft is on track for completion in 2019. Then the company expects No 9 Shaft to be deepened and connected to No 10 Shaft in 2021.

The historic No 9 shaft was originally constructed in 1971. The project is rehabilitating the shaft, sinking it to approximately 7,000 ft, and linking it with the newer No 10 shaft, which was completed in 2014. Connecting the shafts will provide a second egress route between the two shafts as well as improve ventilation. Projected costs for the rehabilitation, sinking and linking of the No 9 shaft to the No 10 shaft are approximately $200 million.

The deposit is located 60 miles east of Phoenix, near the town of Superior. The proposed underground block cave mine is expected to become the largest copper mine in North America, capable of producing nearly 25% of US copper demand each year. As at Codelco El Teniente, the mining method will be panel caving, which allows for the mining of very large relatively low-grade underground orebodies by dividing the deposit into smaller strips, or panels, so that the ore can be removed in a safe and efficient manner.
Ore production from the underground operations will be a nominal 120,000 tonnes per day after an extensive construction and ramp-up period. The maximum throughput will be approximately 150,000 tonnes) per day. Additionally, it is likely that with process improvements throughout the life of the operation, the nominal production rate may increase by 25%. Ore will be crushed underground and then transported by conveyor to two production shafts and hoisted to an underground midway offloading station within the two production shafts.
Resolution Copper will use a standard-gauge rail system that will allow bottom-dump railcars to be gravity-loaded with ore delivered from overhead chutes. These railcars will be routed to the dump station above the underground crushing facilities. Resolution Copper will use electric semi-autonomous locomotives to pull the railcars. The rail system will be a looped configuration, with two parallel drifts spaced on approximately 18 m centres in the production areas.
In total, approximately 594 pieces of mobile equipment are expected to be employed, which includes the large LHD fleet for the extraction level, moving ore from the drawpoints to the ore passes.