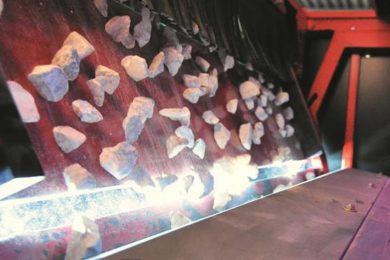 X-ray Transmission (XRT) ore sorting looks to be catching on in mining, with Vancouver-based Almaden Minerals the latest company to put the technology to the test.

Almaden, which is the majority owner of the Ixtaca gold-silver project in Puebla state, Mexico, recently engaged TOMRA Sorting Solutions to run a 2,200 kg sample of material from the project through a commercial scale XRT machine in Germany and the results speak for themselves.

The limestone sample, collected from fresh drill core in the Ixtaca Main zone, was crushed and screened at a McClelland metallurgical lab in Reno, US, and shipped to TOMRA in Wedel, Germany.

The results showed including conventional XRT ore sorting technology could:

And, these benefits came with only a “modest impact on capital costs”, Almaden said.

Morgan Poliquin, President and CEO of Almaden, said the Ixtaca deposit was particularly well suited to the technology as the occurrence of gold and silver in the limestone-hosted portions of the project is in the form of high-grade veins and veinlets that “branch and re-connect, as well as locally change strike and dip, pinch and swell”.

This can result in wireframe models that contain interspersed irregular zones of barren limestone host rock, leading to dilution.

The broad-band radiation that comes with sensor-based ore sorting and penetrates the crushed and screened mineralised rock can see beyond this and ‘reject’ what would be considered waste rock from further processing (see below graphic, credit: TOMRA).

The TOMRA test work will now go into the company’s feasibility study at Ixtaca, which is expected to be completed this year.

In the meantime, another precious metals focused company has already gone ahead and installed a commercial XRT unit in its operation.

Pantoro, in its June quarter production results, confirmed a Steinert XRT ore sorter was installed and commissioned at its Halls Creek gold mine in the Kimberley region of Western Australia.

Pantoro said: “The ore sorter will be the primary facilitator of continued production increases during the coming year. The full benefit will be achieved from the ore sorter as ore development and production from the Wagtail underground mine ramps up.”