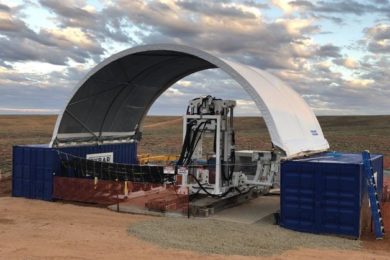 Oz Minerals’ Carapateena underground copper-gold project in South Australia remains on track, with total development at 6,285m as of the end of June, the company said.

Contractor Pybar Mining Services achieved record monthly development of 505m during May and, in accordance with Oz’s plan, transitioned over to Downer EDI for underground mining services in June with limited impact.

Carapateena is envisaged as a 4.25 million tonne per annum underground operation costing some A$916 million to build and producing 65,000 tonnes of copper and 67,000 ounces of gold per year over a 20-year mine life.

The deposit, which is shaped like a near vertical pipe and sits under some 500 m of unmineralised rock cover, will be mined using sub-level caving. The deposit will be blasted in 25-m sections with ore collected by loaders before being crushed and loaded onto a conveyer belt to surface.

Oz is now in phase two of construction with commissioning expected by the end of 2019.

In the company’s quarterly production results, it said underground development works, which were at 435m vertical depth at the end of June, would be expanded to include access development for future underground crusher installations in the current three-month period.

The first raisebore hole commenced in the June quarter (see photo) in preparation for installing and commissioning the first ventilation raise in the September quarter.

Site earthworks for the processing plant are now underway, with engineering progress exceeding 70%.