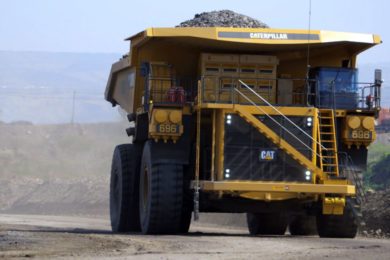 WesTrac, one of Australia’s leading Caterpillar dealers, has responded to rising demand for ultra-class haul trucks out of Western Australia by ordering four Cat 794 ACs to its Reid Road assembly facility.

The trucks, which arrived recently, offer improved safety features, serviceability and performance over its competitors in this class of off-highway truck, WesTrac said.

The 794 AC made its debut at the MinExpo show in Las Vegas in September 2016. Following extensive field testing, controlled rollout of the new truck started in 2015.

The haul truck hosts a fully-integrated Caterpillar electric drive system that delivers improved fuel efficiency and speed on grade, ably supported and backed by WesTrac’s branch locations throughout Western Australia, according to the dealer.

WesTrac CEO Jarvas Croome said the 794 AC performs better in every way to competitor brands, with the 290-tonne class haul trucks becoming a popular choice for leading miners around the world.

“Caterpillar remains focused on providing its customers with both mechanical and electrical drive haulage solutions, but is also proving to have a competitive edge when it comes to electric drive systems,” he said.

In tests against competitors, the Caterpillar 794 AC displayed 19% higher stall torque, delivering stronger performance in soft underfoot conditions. This adds to faster cycle time when pulling away from a loading tool on softer ground.

Caterpillar’s study showed the 794 AC has both an empty machine weight and payload advantage, with the 794 AC typically delivering around 10-t more payload and better tonne per litre fuel consumption. The Cat fully-integrated drive and high voltage system achieves 1-2% better powertrain efficiency to the ground and, overall, it demonstrates a fuel advantage of up to 5% and 10% improved tyre life.

Croome concluded: “We are excited to have four 794 AC off-highway mining trucks in stock now and available to the mining industry, cutting down the usual waiting period between order and delivery.”