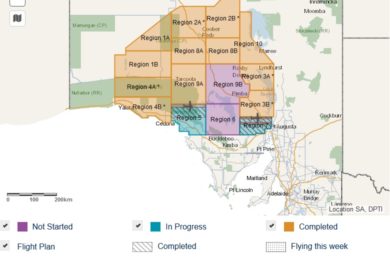 New data collected from the Geological Survey of South Australia (GSSA) and the Commonwealth Scientific and Industrial Research Organisation (CSIRO) is set to open up undercover exploration in the Gawler Craton.

The Gawler Craton Airborne Survey has been designed to capture approximately 1.8 million line kilometres of new magnetic, radiometric and digital elevation geophysical data over an area of some 324,000 sq.km.

The data will far surpass the current patchwork of surveys and provide a single, uniform dataset that will be fundamental in reinterpreting the geological structure of the Gawler Craton, according to the South Australia Government.

This week, the first data release of rock depth from the programme – focused on the north-western Gawler Craton – was published.

Officially opening the South Australian Resources and Energy Investment Conference (SAREIC) in Adelaide on July 30, Minister for Energy and Mining Dan van Holst Pellekaan said the information “will give explorers a head start on their exploration programmes and save precious time and money”.

“When it comes to exploring undercover, knowing the depth of prospective rocks is critical, given the cost and expense involved in drilling. This project is an international standout bringing an amazing clarity and precision in seeing through earth’s cover,” he said.

Today’s release is the first of 16 packages to be rolled out by the GSSA over the next 12 months covering the remaining Gawler Craton survey, and builds on previous releases of magnetic, radiometric and digital elevation data across a vast region of South Australia.

Despite many mines and prospects, the Gawler province is largely underexplored due primarily to the cover of regolith making exploration difficult. Statistical analysis of the type of orebodies present in the Gawler Craton, compared to similar style deposits globally, suggests there is an opportunity for more economic mineral discoveries to be found.