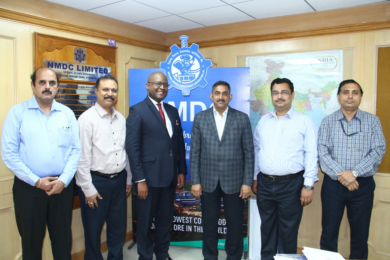 These are busy times for India’s state-owned iron ore miner NMDC. In the Chitoor district of Andhra Pradesh the company bid against other major miners such as Vedanta, Adani, Ramgadh and Rungta for a mining licence area of 263.01 ha in the Chigargunta-Bisanatham gold block which NMDC Joint General Manager for Mechanical Engineering GSSV Suresh told IM is estimated to contain a Resource of 1.83 Mt at 5.15 g/t. The total recoverable gold content is 8.5 t with upside potential, while the mine will be underground. NMDC won the auction with a final bid offer of 38.25% where it will share this proportion of the revenues from the mine with the government. This is the first time NMDC is getting involved in gold mining. NMDC expects to invest around INR4.5 billion ($65.52 milllion) in several phases to develop the mine in the next two years.

Elsewhere, NMDC is also expanding its interests into South Africa. On July 30 the company announced that it and Kopano Logistics Services (Pty) Ltd (BEE partner) have established a 50:50 joint venture company in the name Kopano-NMDC Minerals (Pty) Ltd to undertake exploration and development of mineral properties in the Republic of South Africa. The Board meeting of Kopano-NMDC Minerals (Pty) Ltd was held on 27th June 2018 in Hyderabad.