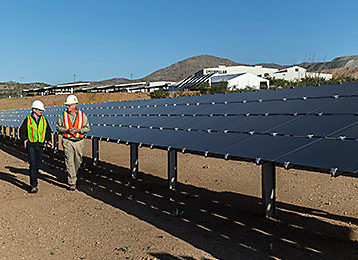 One of the key factors affecting the operation of mines in Sub-Saharan Africa is the availability of a reliable, uninterrupted supply of power. However, Sub-Saharan Africa has a severe power deficit which means that mines are often not guaranteed to receive a reliable supply from the national power utility. As a case in point, when Eskom, the South African power utility, instituted a load shedding programme in 2015, this resulted in interruptions to mining operations which ultimately led to a contraction in South Africa’s GDP that year.

In its latest mining newsletter, Hogan Lovells briefly discusses each option in turn.

Captive power plants are generally only appropriate for mining operations with an extended mine life and significant long-term power demand. The term “captive” refers to the fact that all or most of the output of the power plant will be used to supply the relevant mine. A captive power plant will typically, therefore, be located close to the mine which it is intended to supply (perhaps at the mine mouth), in order to reduce the need to build transmission infrastructure and also transmission losses.

It should be noted that if a project finance option is used to finance the capex of a power plant, it is likely to take several months, if not years, before the financing is ready to be drawn down, due to lenders’ due diligence as well as the negotiation of a complex finance and security package. Furthermore, following financial close, the construction period of the power plant must also be taken into account. This could be in excess of 18 months, depending on the type of technology deployed. The debt will be repaid, either from the revenues earned by selling power to the mine or, if this is supplied free of charge, through the sale of the commodity that is being mined, over the life of the mine.

Captive power plants are therefore not suitable in situations where power is required on an urgent basis or the mine life is relatively short.

Where an on-site power solution is required within a matter of months, the deployment of diesel generators is the most common solution. Diesel generators are provided by a number of suppliers, such as Aggreko, Caterpillar, Cummins, etc. Generators can be purchased but are more commonly rented from, and operated by, the supplier of the generators.

As mentioned above, national utilities are frequently unable to meet the power demands of mines within their countries. However, utilities in other countries may have a surplus of power.

In such circumstances, power may be traded between utilities under the framework of a power pool, the South African Power Pool (SAPP) being one such established power pool. Mines may take advantage of the trading arrangements of the power pool to secure supply from outside the country in which the mine is situated.

The contracts for such power trading are specialised and need to cover issues such as dispatch, reconciliation, payment security, damages for non-supply (and establishing fault in such circumstances), etc. Power trading is potentially the quickest way for a mine to secure power, provided that suitable transmission infrastructure exists and a utility within the power pool has a surplus.