Condra Cranes to speed up Shaft 6 work at Oyu Tolgoi 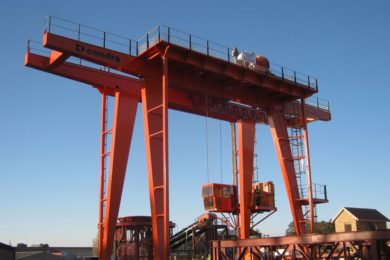 Pre sinking is expected to be completed in less than a quarter of the time considered the norm – four months instead of the usual eighteen, the company said.

“The Condra portal is radically different from the level-luffing type of crane traditionally used for pre sinking. Instead, a high-speed, high-lift main hoist removes excavated material vertically, by kibble, through an opening in the centre of a drilling stage positioned by two separate stage winders mounted on the same portal frame,” Condra said.

The portal machines come with a lift speed of one metre per second, 15 times faster than the four metres per minute found in standard mine workshop applications, according to the company.

The advanced portal design was researched during 2013 for incorporation in a prototype machine used at a new diamond mining shaft the following year.

During the pre-sink phase at OT, the machines will stand over the mouths of the main and auxiliary rescue shafts, and remain in place until the shafts have been drilled, blasted, supported, cleaned and lined with concrete.

Oyu Tolgoi is a combined open-pit and underground project located some 550 km south of Monglia’s capital, Ulaanbataar. It is owned 66% by Turquoise Hill Resources (THR) and 34% by the Mongolian government, with Rio Tinto holding a majority stake in THR.

When the underground mine is fully ramped up in 2027, Oyu Tolgoi is expected to produce more than 500,000 tonnes of copper a year.

Oyu Tolgoi’s pre-sink cranes will be bigger and faster than the diamond mining machine (pictured), and will feature improved electronics, Condra said. Importantly, lifting speed of the 160 kW 15-t main hoist on the new portals will double to 60 m/min.

The portal frame itself will comprise a 14-m high, 12-m span extended by 3.2-m cantilevers on both sides to allow excavated material to be moved to dump trucks using roads adjacent to the shaft. Stairwells will replace the cat ladders of the diamond mine portal.

Below-ground lift height will be 100 m, and the complete machine will weigh 88 tonnes.

Completion of both cranes, the design of which makes provision for disassembly and containerisation, is scheduled for early November. They will be shipped to Mongolia via China.