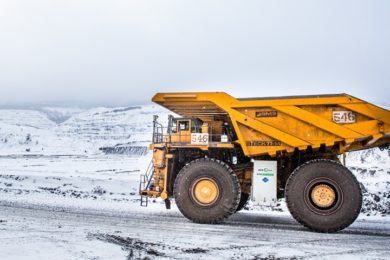 With oil and diesel prices on the rise around the world, GFS Corp is reporting increased interest in its EVO-MT® System for off-highway machinery. Much of this renewed interest is coming from the mining sector where the company’s products allow haul trucks, wheel loaders and drill rigs to operate on a combination of diesel and LNG or NG+D® as the company refers to it.

GFS reports that LNG projects in the mining sector generally become viable with oil at or above $60 per barrel. “We have found that LNG becomes competitive with diesel fuel when oil prices start to breach the $60 level. Of course the delivered price of LNG to a mine is directly correlated to the distance it is transported, so having an LNG terminal or liquefaction plant nearby is critical”, said Jason Green, company President and CTO.

According to Green, small to mid-size mining operations have to rely exclusively on LNG transported from an import terminal or regional liquefaction facility. Larger mining operations with access to pipeline natural gas, however, can often justify the construction of a dedicated LNG plant. “What we have consistently seen with our larger mining projects is that the LNG requirement for the fleet is often large enough to compel the mine operator to at least look at the feasibility of constructing a new LNG plant. In most cases the mining company will look to bring in a partner to build, own and operate the plant, providing the onsite LNG fuelling infrastructure”, stated Green.

GFS has also seen that some markets have higher diesel fuel pricing even when oil is relatively inexpensive. “We launched our mining solutions business when oil was between $80 and $100 and this allowed us to focus our initial efforts in the US and Canada. The oil crash compelled us to look outside these two markets and we were surprised to find that diesel costs were still relatively high in some countries even with very low crude prices. Whether caused by high transportation costs, taxes or government controls, or often a combination of all of these factors, we found that LNG could still be very competitive to diesel fuel in some markets,” said Green.

GFS Corp first introduced the EVO-MT® 7930 System in 2012 for use on Caterpillar 793 B, C and D models of trucks. Since that time they have gone on to introduce conversion systems for Caterpillar 777 and 785 haul trucks as well as Komatsu 830 and 930 trucks, Terex Unit Rig 4400 trucks and most recently Caterpillar 992 wheel loaders. Vehicles converted to the EVO-MT® System have accumulated over 500,000 hours in operation to date.

With current projects in the US, Mexico and India, GFS also reports strong interest for their MT System in Eastern Europe, China, Australia and South America. “We are still at the beginning of the adoption curve in terms of proving that LNG can be a viable fuel in the mining sector, however, we are seeing an acceleration in both availability of LNG on a global basis as well as real interest on the part of mining companies to take a hard look adopting this fuel as a way to improve the bottom line and improve sustainability,” concluded Green.