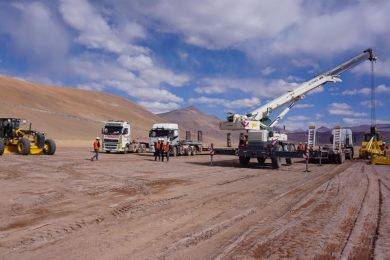 The ramp up to production at Fortuna Silver Mines’ Lindero gold project in Salta, Argentina, is well underway with equipment arriving on site ahead of first output in the September quarter of next year.

In a project update, the company said initial on-site delivery of Komatsu mine equipment started in mid-July with the arrival of two graders and a dozer (see photo).

The manufacturer is on schedule to deliver 11 additional pieces of equipment, including six 100 t rigid dump trucks and two 13 m³ wheel loaders, in September.

Final delivery of two mine production drill rigs is scheduled for November 2018, which will allow development activities to kick off in December and drilling and blasting to take place in March 2019.

Jorge Ganoza, President, CEO and Director of Fortuna Silver, said delays in the building and expansion of the camp at site had been a limiting factor for commencing certain contracts, but the project team was working on opportunities to further “optimise the sequencing of concrete, electromechanical and piping installations to streamline the project’s schedule”.

He said mass earth movement and leach pad construction was, after a slow start, in “full gear”, while detailed engineering was between 70% and 100% completed in all project areas.

Lindero has been designed as an 18,750 tpd open-pit mine with a life of 13 years based on existing reserves. Crushed ore will be placed on a leach pad with the pregnant solution pumped to SART and ADR plants prior to electrowining and refining where gold will be poured to doré bars.