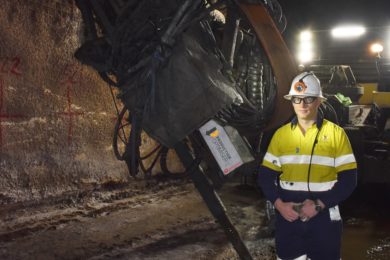 For the past two months, the technology has been installed on selected long hole rigs at the company’s underground operations – improving rig accuracy and setup with an immediate benefit to operations, Minnovare said.

Since implementation, drilled meters have increased 17% and blasthole deviation at the collar has reduced by 75%. Flow-on benefits have included an increase in average recovery due to reduced bridging and a reduction in average dilution – cutting overall production costs.

Rob Parsons, General Manager of Northern Star Mining Services (pictured), said: “In a very short period of time we have seen tangible benefits from the Production Optimiser system. The system has been well received by all operators, and Minnovare have worked with us to ensure a successful implementation.”

Minnovare Managing Director Callum McCracken said: “Northern Star were an early adopter of our production drilling technology and we’re pleased to see the immediate effect it is having, with efficiency gains right across their operations.”

McCracken said Northern Star had demonstrated a strong commitment to collaboration with new technology forerunners, and being an early adopter of new technology was central to the company’s core strategy for the future – “remaining a leader amongst their peers and being able to attract the best and brightest the industry has to offer”.

He added that this type of collaboration works well and is the most efficient way to make the biggest impact, in the shortest time-frame.

NSR’s Principal of Innovation and Technology, Jeff Brown, said: “We are always looking to work with parties that provide solutions to problems and to implement opportunities that drive a better overall business outcome. Minnovare is a fitting example of a provider that has worked through all aspects of their solution to ensure it integrates and delivers immediate value. Their approach and ability to rapidly act upon improvements has not only seen a very successful deployment but has laid the foundation for further collaboration.”

According to Brown, NSR will be “actively involved” in the development of a series of new Minnovare products to deliver additional efficiencies to the company’s underground mining operations.

“Collaborating with solution providers like Minnovare and the technology they specialise in represents the future of the industry, so we’re very pleased to be working with them,” he said.

Earlier this month, Minnovare signed up to be an integration partner with Software provider Deswik as the two looked to provide a flexible and integrated mine planning platform.