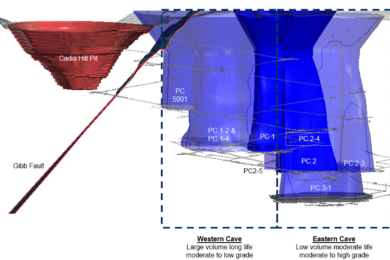 The Newcrest Board has approved progressing the Cadia Expansion PFS to the feasibility phase. The PFS establishes Cadia’s future mine design, mine sequence and sustainable production rate. The following will be pursued in a feasibility study which is expected to be completed in the first half of FY2020:

The plant expansion capital cost is about A$250 million lower than previously expected.

The feasibility study scope is to include development of PC2-3 and expansion of plant to 33 Mt/y. There should be recovery improvements through course separation or additional ball milling. It will also look at development of potential options to further debottleneck plant to 35 Mt/y.

Next panel cave to be developed is PC2-3 at an estimated capex of A$540 million. The study assumes commencement of production ramp-up by the end of H1 FY2022. Early works program of critical path activities for the establishment of PC2-3 commenced in FY2019.

Newcrest Managing Director and CEO, Sandeep Biswas, said “Two years ago we set out to expand Cadia to 32 Mt/y for an expected cost of A$310 million, today we announce expanding the plant to 33 Mt/y for A$58 million with potential to grow to 35 Mt/y. The study has delivered a A$252 million saving and an additional 1Mt/y of throughput capacity. The project team have applied an ‘owner’s mindset’ in delivering an expansion plan with a low capital intensity which has the potential to deliver an impressive 21% return on capital and ensures Cadia remains a tier 1 producer for a long time to come.”

The study assessed a number of expansion cases, ranging from the current 30 Mt/y base up to 40 Mt/y, having regard to the capacity of the mine, processing facilities and major infrastructure. The mining rate profile analysis showed that a long term sustainable mining rate of 33 Mt/y is achievable and that 35 Mt/y represents the upper limit of Cadia’s caving footprint capability until approximately FY2027 when PC1-2 production ramps up. To reliably expand the processing plant beyond 35Mtpa would require a third concentrator and an additional A$440 million of capex. The study is predicated on a low-cost expansion to 33 Mt/y with potential further debottlenecking to 35 Mt/y.

The selected 33 Mt/y rate is based on detailed mine production rate analysis utilising simulation modelling and shows that spatial constraints within each mining area and the impacts of fragmentation during ramp up periods are key mining constraints.

The process plant has already been progressively debottlenecked from 26 Mt/y, when Cadia East was commissioned, to the current rate of 30 Mt/y. The study has identified further debottlenecking opportunities to increase the rate to 33 Mt/y and options to further debottleneck to 35 Mt/y will be assessed during the feasibility study.

Concentrator 1 is currently constrained to 22 Mt/y by the SAG mill. Projects to further debottleneck the SAG mill have been identified which, as estimated in the study, can potentially increase throughput by approximately 3 Mt/y to 25 Mt/y. Concentrator 2 has recently undergone a significant debottlenecking program that has increased annualised throughput from 6.5 Mt/y to 8 Mt/y. Incremental capital expenditure of A$58 million is required for upgrades to the underground materials handling system and the installation of additional crushing capability within the Concentrator 1 plant at Cadia.