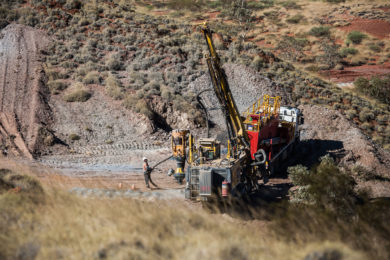 The new target, which has already been the subject of reconnaissance drilling, was identified through a combination of 3D magnetic inversion, structural analysis and soil geochemistry.

Drilling has returned what Millennium calls a “significant” 12 m intercept comprising a broad zone of highly anomalous mineralisation with a similar alteration to Golden Eagle – where the company has defined 334,400 ounces of resources grading 1.4 g/t Au – including a narrow zone of high-grade gold.

The 3D magnetic inversion models have also outlined an alteration zone measuring 400 m in strike Millennium is planning to follow up with drilling, it said.

This whole approach is something very new for Millennium, CEO Peter Cash said.

“While most of our exploration at Nullagine has historically been directed towards outcropping geochemical targets – which have been very successful in delivering ongoing increases in resources and reserves – we believe that an integrated targeting methodology based on a mineralised system approach has the potential to unlock major new discoveries,” he said.

“Three dimensional magnetic inversion data has never previously been used to identify gold mineralisation at Nullagine, and we are really excited to now have confirmation that this technology can successfully define new gold targets in the Mosquito Creek Basin.”

He said the use of 3D data represents an “enormously important technical breakthrough” for the area and Millennium.

Millennium produced 70,371 ounces of gold at Nullagine in the year to the end of June.