Wood to scope out Angularli uranium project in Australia 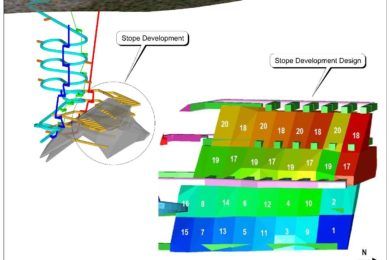 Wood has been contracted by ASX-listed Vimy Resources to carry out the engineering scoping study for the Angularli uranium project in the Northern Territory of Australia.

Work has already commenced on the study, with completion expected by the end of the year, Vimy said.

Angulari is located in the King River-Wellington Range tenement group and owned 75:25 by Vimy Resources and a subsidiary of Rio Tinto. It currently has an inferred resource of 910,000 t at 1.3% U3O8 for 26 MIb of contained uranium.

The conceptual mine development approach for Angularli to be used as a basis for the scoping study (pictured) is similar in approach to the historical Nabarlek mine, 65 km from Angularli. Nabarlek operated successfully in 1980-1988 and produced 24 Mlb of uranium oxide from 550,000 t of ore at an average grade of 1.84% U3O8. It has since been successfully decommissioned and the site fully rehabilitated.

Metallurgical test work on Angularli is currently underway at the Australian Nuclear Science and Technology Organisation and will be completed this month. Results to date have shown uranium extraction of 98.5% at a sulphuric acid consumption of 14 kg/t, and an oxidant consumption of 1.4 kg/t hydrogen peroxide.

Metallurgical studies on drill core obtained during the resource estimate have also indicated there is potential for the direct precipitation process to be technically feasible at Angularli, while the ore may also be amenable to ore sorting.

Mike Young, managing director and CEO of Vimy Resources, said: “The high-grade nature of the Angularli deposit provides us with the opportunity to develop a Tier One asset, with the potential to be profitable in any uranium market.”