Start of construction of Udokan mining and metallurgical plant 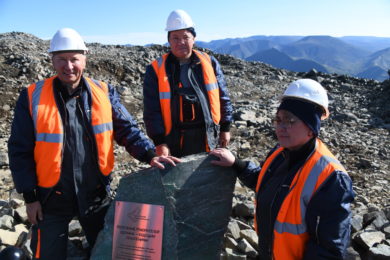 Baikal Mining reports that “Kazikaev pointed out that Udokan Project was more than one decade old, and many people viewed its prospects with scepticism, which was well understood. That was the precise reason, in his opinion, why the actual start of construction of Udokan Mining and Metallurgical Plant was so vital for the development of the whole Zabaikalye Region.”

“One shall always remember that it is impossible to resolve the issues of such scale without proactive cooperation with the government of the region. Project execution crucially changes the economic, infrastructure and social landscape of the territory. Synchronization of Udokan Mining and Metallurgical Plant development plan with general territory development plans is essential for the efficiency of the Project. We as well as the government of the region are fully aware of it,” he stated.

Zhdanova made a special mention of the high social and economic importance of the project under development. “It is clear even at this stage that the project is executed by a highly professional team, the proposed design solutions have been thoroughly studied, and their implementation will provide a serious social and economic impact. Baikal Mining Company that arrived in Kalar District to develop Udokan Copper Project will play a major role in the development of Kalar District and, undoubtedly, Zabaikalye Region on the whole. We are speaking of new jobs and social infrastructure development. We are ready to support our partners in full-scale development of Udokan.”

Ryabov informed that site preparation was starting immediately and contracts were being signed with contractors and suppliers of the required machines and equipment. In the coming months the company planned to set up the construction division and road building division right at site. All required project documentation for Udokan Mining and Metallurgical Plant was submitted for state expert review.

Stage 1 of the enterprise will operate with the annual capacity of 12 Mt/y of ore (130,000 t/y of copper) with further expansion to 48 Mt/y of ore. Processing of Udokan ore will be based on flotation and the plant will produce cathode copper and sulphide concentrate. Stage 1 of the plant is expected to come online in 2022.

The project lies in the north of Zabaikalie Region (Kalar District), Russia.  It is the third largest known undeveloped copper deposit globally, with Reserves (JORC compliant) of 26.7 Mt of copper.