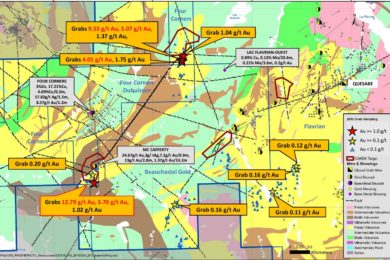 Falco Resources’ recent artificial intelligence-inspired prospecting work at the Horne 5 gold project in Rouyn-Noranda, Quebec, has provided an example of how this technology can be successfully leveraged to increase exploration success.

Following the appointment in December 2017 of Albert Mining, a leader in the use of AI, to analyse historical data in the Rouyn-Noranda mining camp using its pattern recognition algorithms, CARDS, Falco has since gone out and followed up on several identified targets.

Falco said the AI software learned the signatures of positive and negative gold and base metals targets and identified new targets with a high discovery potential. Fifty anomalies in gold (15), copper (13), zinc (11) and silver (11) were identified, each of which were grouped into 11 exploration areas.

With only four of these exploration areas investigated, there is already hope that the AI technology could lead to an increase in Horne 5’s 6 Moz gold-equivalent reserve base.

One of the most interesting prospecting is at the Four Corners property, some 20 km from Horne 5, where a new showing was identified near a CARDS target and following field work.

Additional field work also occurred on the Four Corners Dubuisson property, located less than 4 km to the southwest of the new showing, along a known regional structure. Grab samples, returning 12.79 g/t Au and 3.10 g/t Au, were collected from an angular mineralised block. The angular shape and size (about 1.5 m) of the block may indicate close proximity of the source, according to Falco.

“These results, on both properties, have highlighted a northeast-southwest structural corridor of great interest for gold. Field exploration work continues along strike between these two new surface showings. Channel sampling of the Four Corners showing is in progress on the surface already exposed,” the company said.

The company plans to carry out mechanical stripping, mapping and more channel sampling in the next weeks after receiving a permit. This should allow for a better geological and structural understanding of the gold distribution and controls, Falco said.

“The excellent results on our greenfield properties are very exciting and promising as they are located in zones of very little historical work and without existing showings,” the company said.

And, while the zones remain open in all directions and the focus will be on the Four Corners sector, Falco has confirmed it will continue follow-up work on other CARDS targets over the next weeks.

“The company is very confident on finding other showings based on the initial success of the methodology and work programme to date,” Falco said.